So on Sunday, we took Dennis, Tucker, and Trixie to Fiesta Island, a large off-lead park in San Diego, to meet some other people from the local vizsla rescue group, including his sister, who was also rescued from the canyon in Lake Elsinore. (His brothers were not in attendance.) We went into the park, met his sister and the others, and headed for the beach. We thought Dennis wanted to play with his sister, so we let him off-lead, and he immediately took off running — past his sister, past everyone else, down to the beach, through the gap between the fence and the water, and back up to the road. Well obviously that isn’t what we were expecting.

I took off running after him, but of course Dennis is way faster than I am and I quickly lost sight of him as he ran up the road. I finally caught up to him in the parking area, where he was sitting by our car as if waiting to be let back in. He let me put the lead back on him and we returned to the beach and my hyperventilating wife. We figure that Dennis was thinking, “I know this routine … you take off the lead, I go exploring, and the next thing I know you’re gone and I’m wandering around lost for a month. Screw that. I’m going back to the car.”

Needless to say, he stayed on lead for much of the remainder of his walk, but we did eventually let him off again on the beach farthest from the entrance. By then he had relaxed and had himself a good little romp with his sister, the other four vizslas, and a couple of friendly strangers.

But nothing too friendly — after all, he’s not “fixed” yet. That will be his Christmas present. ‘Tis the season to be neutered, fa-la-la-la-la … 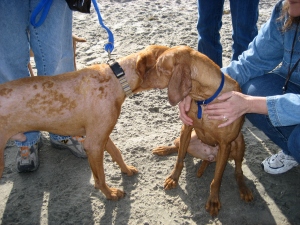