So yesterday, I went to the park with my wife and Tucker to help with Tucker’s scenting; and by “help” I mean I sat and held Tucker’s lead while my wife went around laying a trail of mozzarella bits and hiding a sock full of string cheese, which is the “jackpot” at the end of the trail.  (Also, I “helped” by discouraging her from marking the trail with flour, on the theory that after we left, somebody would come along, see the flour, think it was anthrax or ricin or something, and call in a HazMat team.  I think I annoyed her a little, but at least she isn’t going to get carted off to jail.)

Once the trail was finished, Tucker got down to work.  Notice his special harness — this is what he wears so he knows he’s supposed to be tracking.  It’s kind of like when Clark Kent takes off his eyeglasses and puts on his red and blue jammies and then he’s Superman. 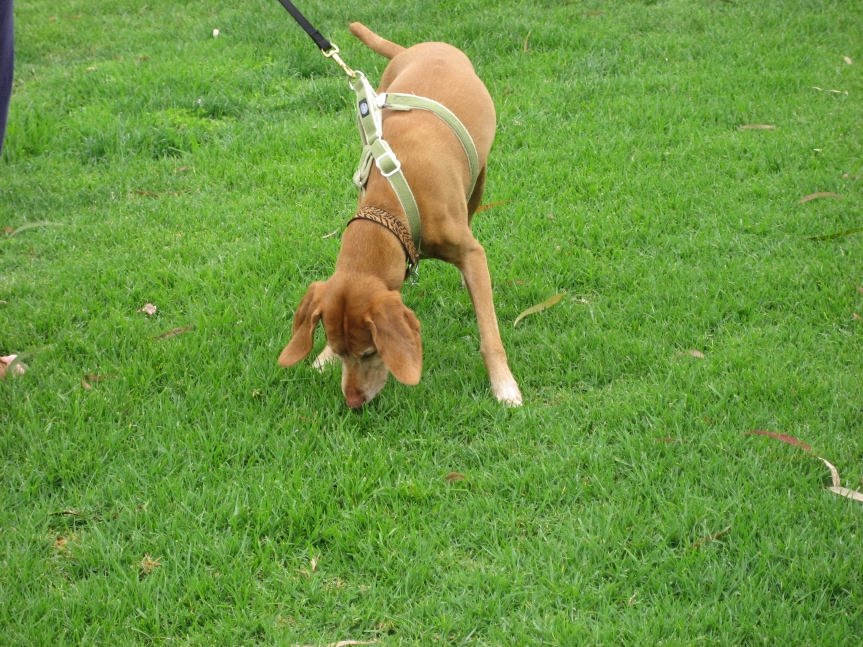 According to the trainer, Tucker is a very determined and methodical scent tracker.  This is what makes him so successful at filching food off the counter and from out of the trash; but when he’s doing scent work, he uses his powers for good instead of evil.  NOTE:  For some reason, my wife objected to this camera angle, so everyone please look at the dog and not at her.  Thanks

As you can see, Tucker really enjoys his scent work.  I’m pretty sure this is because he gets a big bag o’cheese at the end of it, but my wife says he likes having a job, as well as getting time alone with Mama, away from Dennis.

Of course, this doesn’t mean he’s stopped trying to steal food when he’s home.  If anything, he’s gotten even better at it — and he was already an expert.