The Adventure of Why Tucker is Better than Dennis

Hello good readers, this is Tucker the dog.  Some of you may have noticed recent changes around here and come to the conclusion that I have somehow stolen control of the blog from my brother Dennis, but nothing could be further from the truth.  In fact, Dennis asked me to take over from him because he finally realized that he is young and silly, while I am older and wiser, not to mention better.  Still unconvinced?  Let’s look at the facts. Come, Trixie! The game is afoot! 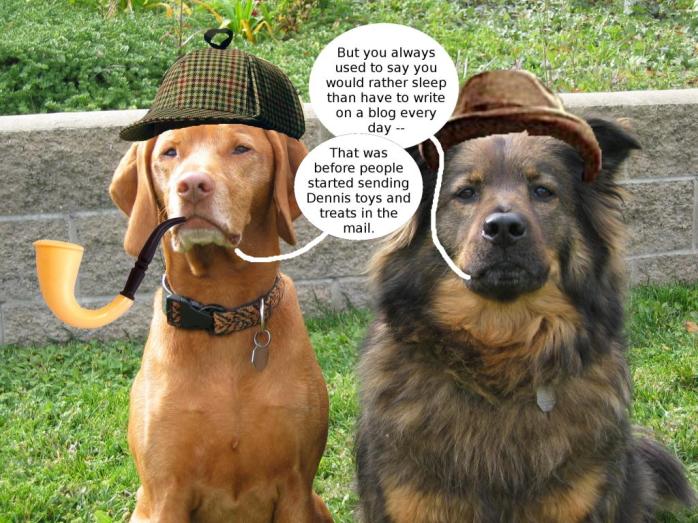 Starting at the most fundamental reason that I am better than Dennis, even a cursory review of established history will reveal that I have seniority around here. We investigators like to refer to this by the very specific legal term “firsties”: 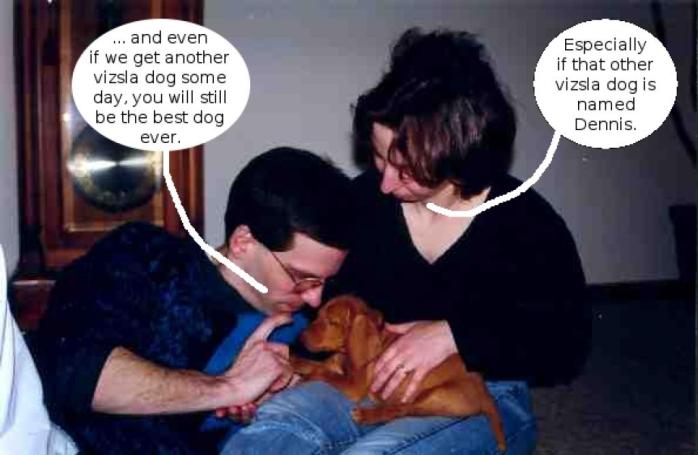 As if that were not sufficient in and of itself, I am also ISO 9001 certified to be the best vizsla dog around. 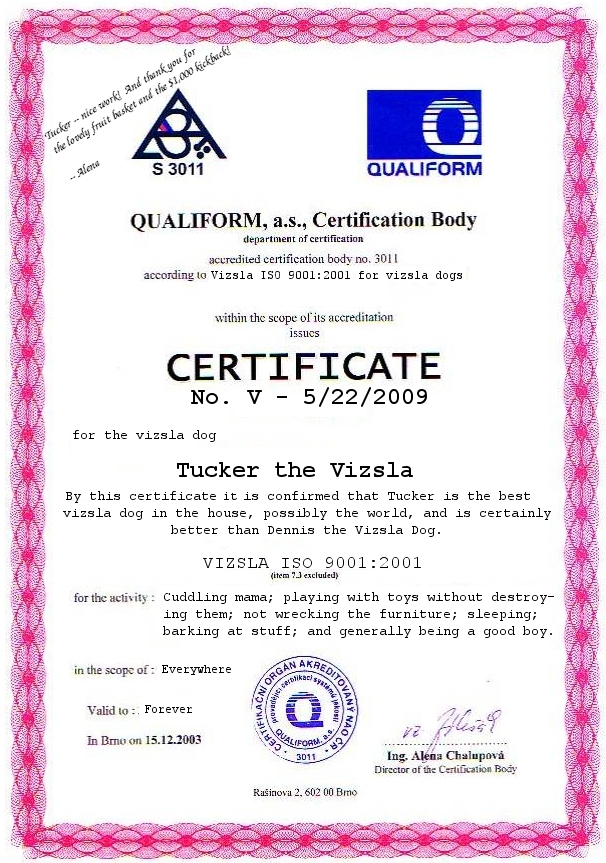 You can’t argue with a certificate, especially one with a seal stamped on it! But if such powerful documentation is not enough to persuade everyone that I am the better vizsla dog, let’s take a look at some empirical evidence. Here we see a screenshot of Dennis’s first post here on the blog formerly known as Dennis’s Diary of Destruction. Say, Dennis, how many comments did your first post get?

Two! That’s right — two! Count them — on one paw! Now let’s review a screenshot of MY first post: 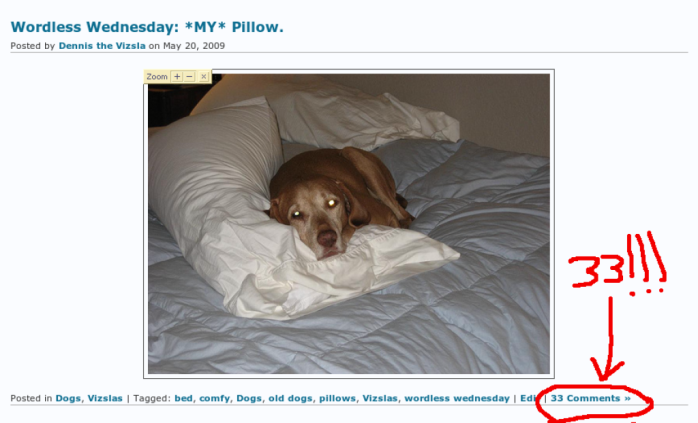 How many comments there? Thirty-three! That’s nearly twice as many comments as Dennis’s first post, and mine didn’t even have any words in it.  Not only that, but it was created before I stole Dennis’s passwords — ummm, I mean, before Dennis turned his blog over to me — which means that readers were EXPECTING to see Dennis, but got me instead, and were so thrilled they felt compelled to comment again and again. The people have spoken — they want less Dennis and more Tucker, and more Tucker they shall get.

Finally — and I hate to have to mention this — there is the matter of the vizsla standard. I don’t like to brag, but I am such a marvelous paragon of vizsladom that I once appeared on the back cover of a vizsla publication. 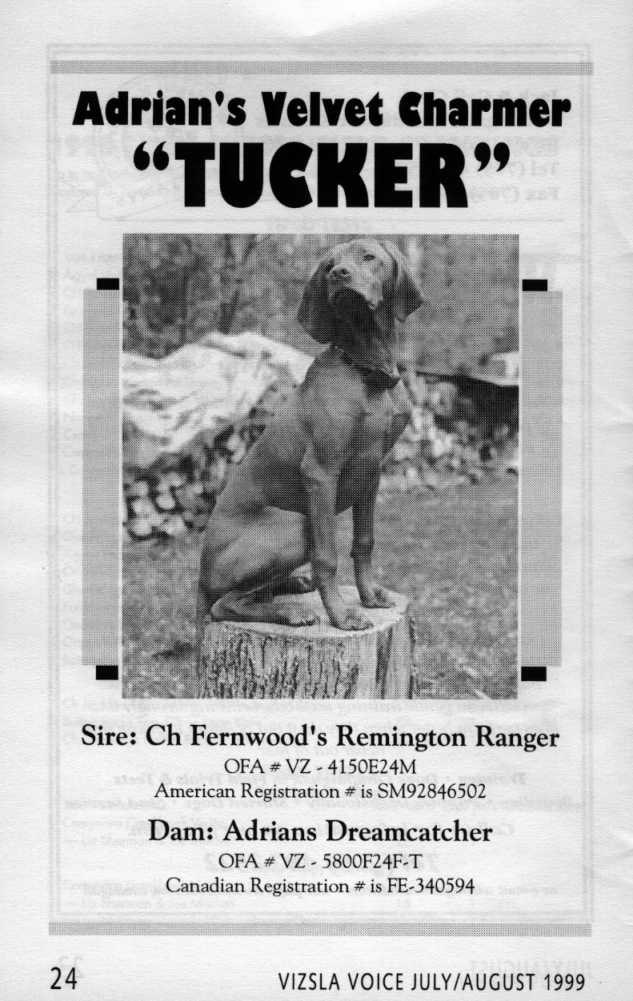 Dennis, while clearly maybe some sort of hillbilly type of vizsla, has a few issues that would make it impossible for him to ever be taken seriously as a proper representation of the breed. 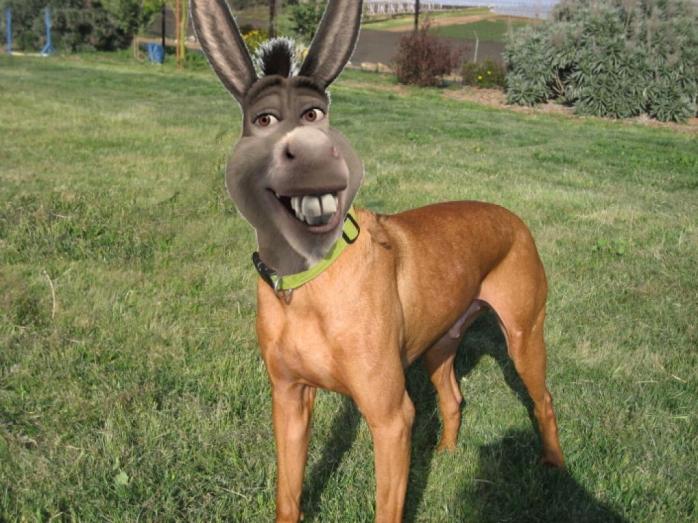 As you can see, his head is the wrong color. Also his ears are unusually long, and he has buck teeth and a little top-knot; in fact, from the neck up, he is a donkey. Sorry to have to bring this up, Dennis, but the people have a right to know.

By now it must be obvious to everyone why Dennis has given me the keys to his blog and slunk away in shame. In the future, I will be happy to accept any treats or toys that might have otherwise been sent to him.

The case of why Tucker is better than Dennis is closed. 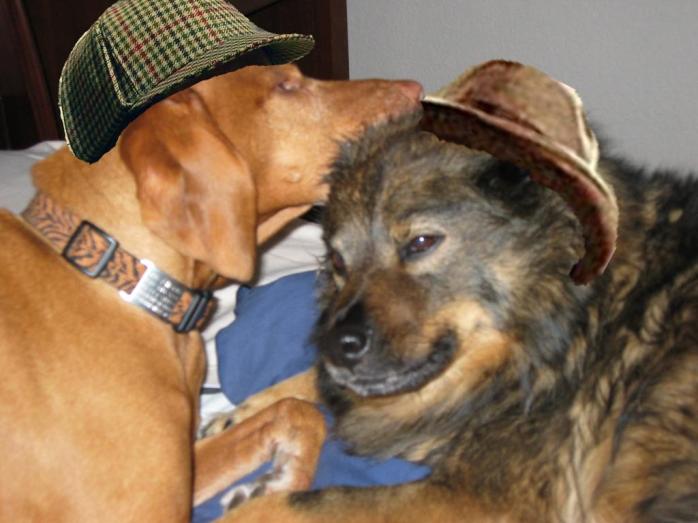