Battle for the Planet of the Stuffies

After the malfunctioning Doghouse of Justice deposited me on this mysterious Planet of the Stuffies, the situation deteriorated rapidly. First I met the contact-lens-seeking, machine-gun happy George; then the Doghouse of Justice was captured by a scouting party of stuffies and taken back to their village.

Now I must get it back.

George seems to think that a frontal assault on the stuffie stronghold would be suicidal but I, knowing stuffies as well as I do, have already formulated a plan that will get us into their village.

With George leading the way — an effort complicated by the fact that he still has not found his contact lenses — we go to the stuffies’ village, where I pose as George’s prisoner. 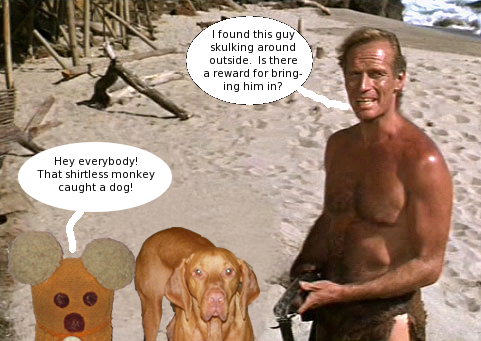 The stuffies are jubilant at having “captured” me, but little do they realize that this is all part of my plan. Once George does his part, the stuffies will scatter like frightened mice!

But George does not do his part. In fact he’s not even here anymore. Where can he have gone?

Having been betrayed by George, my entire plan has now fallen apart. As I am led off to the stuffie prison by my captors, I furiously begin trying to think of another means of escape. Their jail cell will not hold me forever — because I am Dennis the Vizsla, and I never give up.

← Observed Around Southern California
my gest revyoo of marley and me at dadas blog!!! →

22 Comments on “Battle for the Planet of the Stuffies”

If you're looking for James Viscosi's author (or is that "other"?) blog, you can find it at jamesviscosi.com.
Follow The Oceanside Animals on WordPress.com