So this morning, we woke up to find this guy on the hill behind our house: 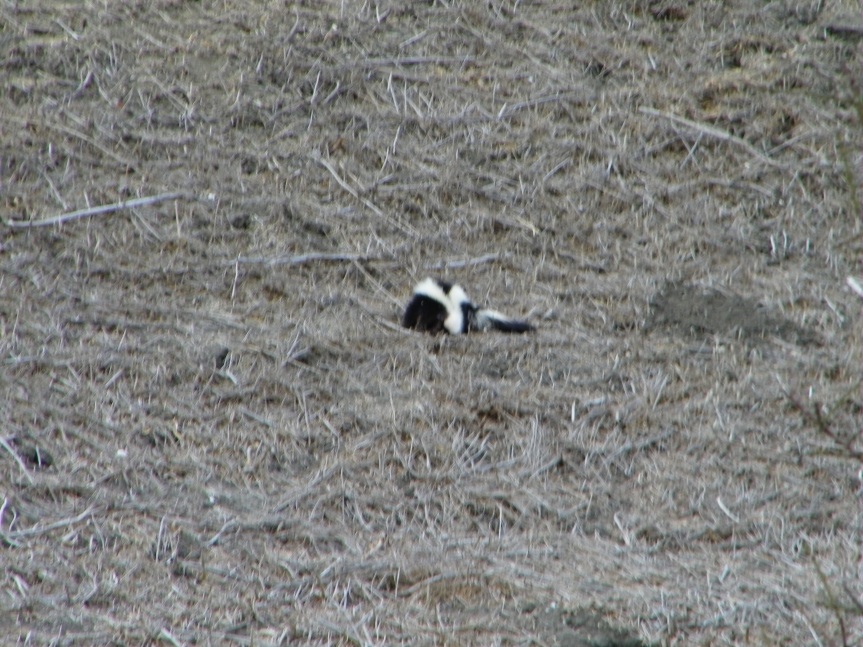 Yes, that’s a skunk out in the daylight. At first I thought it was dead, but, not so much:

As my wife said, looking at it, “That’s not a well skunk.” So now we’re thinking either poisoned or rabid (possibly the “dumb” variety, or possibly the end stage of the “furious” variety). Fortunately it’s outside the fence, but still, there’s no telling if it might wobble its way close enough to the fence to get through, or a coyote might wander by and eat it. So, no problem, we’ll call animal control and they’ll take care of it, right?

Wrong. Animal control is closed, but their message says to call the police if we are reporting injured wildlife. So, no problem, we’ll call the police, and they’ll take care of it, right?

Wrong. The police don’t handle wildlife. They gave me two numbers for wildlife services, one commercial, one non-profit. So, no problem, I’ll call them and one of them will handle it, perhaps for a fee, right?

Wrong. One number was no answer, and the other number didn’t consider the wobbly skunk something that rates a service call on a Sunday. So, we did some more calling around and eventually got the police department to find someone at animal control to call us back. So now animal control will deal with it, right?

Wrong. Animal control says they don’t handle wildlife. They gave us the number for the state fish & game department. So no problem, we’ll call fish & game and they’ll handle it, right?

Wrong. There’s no one there. So we got the number for the USDA’s office in San Diego, which supposedly deals with sick wildlife. But you guessed it — not there. At this point we started calling emergency vets and even the Wild Animal Park in the hopes that they would have the number for some local secret organization that handles possibly rabid wildlife. Their suggestion? Animal control.

At this point the police are trying to help us find someone who will come out and collect the animal (thank you Oceanside police department!) but so far they aren’t having any luck either. We’re keeping the dogs in the house and keeping an eye on the skunk with binoculars. I guess the moral of the story is to know who you need to call for this sort of thing before it happens on a Sunday morning when there’s no one around to pick up the phone.

The Sunday Awards and Meme Show will return next week at its regularly scheduled time!