As you all know by now, I wear many hats besides my fedora — I am an archaeologist, an educator, an entrepreneur, an advisor.  But one role that may have been overlooked as I’ve spun my tales of adventure is my position in charge of maintaining decorum among the fraternities here at the university.  Because I’ve spent so much time away from campus lately, either in outer space, on other planets, or in the distant past, some of the houses in the Greek system have gotten a little bit out of control.  In particular I’ve had reports of problems with Delta House.  Now that I am back and the time-space continuum is no longer in danger of collapse, I can finally deal with these issues.  Compared to the Kongleks, this should be a piece of cake.  Mmmmm, cake. 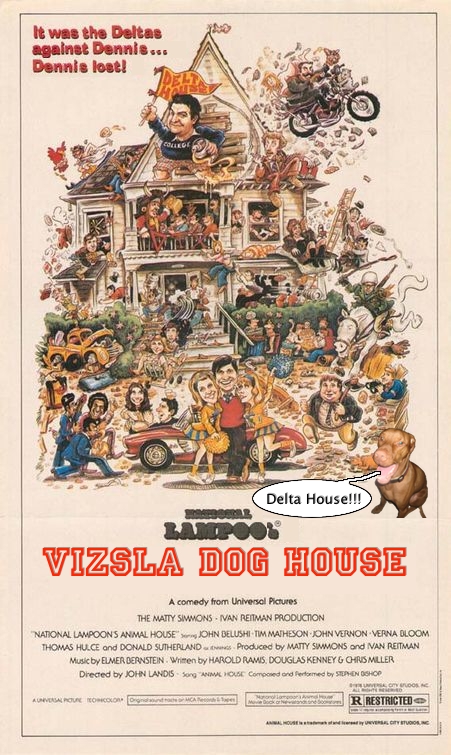 At first, I try to approach Delta House discreetly, professionally, by meeting with their representative Eric “Otter” Stratton in my office.

Unfortunately it appears that Otter is not taking me seriously. I am unable to get him to tell me the address for Delta House, which he claims not to know, and for some reason it is not registered with the university. But Otter did not count on my facility with Google Maps, which I use to locate an aerial photo of the shabbiest-looking house on campus. Surely that must be Delta House.

Surely this many people can’t be wrong about the location of Delta House. I get directions from the nice young men and set off across town to confront the real Deltas. But when I arrive at the indicated location, I find a bizarre ritual in progress, and no members of Delta House! 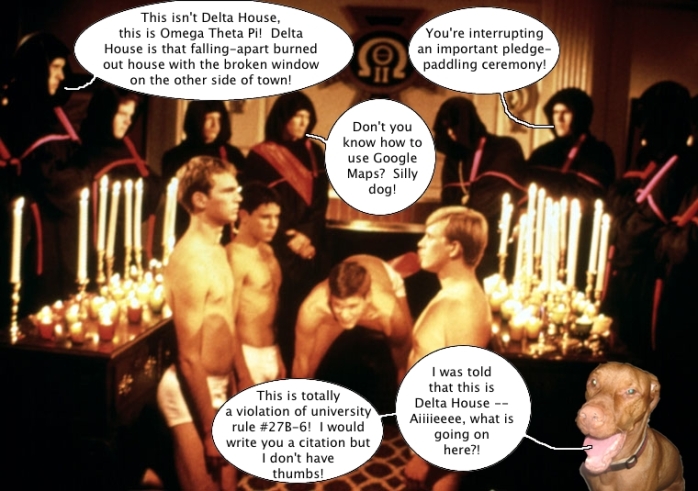 Those young men at the other house misdirected me! That in fact WAS Delta House! I hurry back, only to discover that I have been thwarted again!

Undaunted, I return in an impenetrable disguise as a human, only to be refused entry yet again.

Aha! The foolish Deltas have given me the information I need in order to perform my inspection! All I have to do is return with beer and they will let me in, and then I can confirm the violations and shut them down! After a quick trip to the Hungarian grocery, I return with beer in tow. Now Delta House will pay for making me look silly!

As the Dean puts me on lead and takes me back to his office so he can write me up for violating university policy, I look back and see the Deltas taking the beer I brought into their house. Loud music and strange odors begin to emanate from the shattered windows of their tumbledown residence. Immediately my cell phone begins to ring with complaints from the neighbors, but instead of answering it, I switch it off; because I am Dennis the Vizsla, and I never give up. Except this time.

← On The Border
noo feetcher!!! its the sunday awards and meem show!!! →