When I last filed a dispatch, I was about to join the mysterious Doctor inside a dog house on the Planet Petco, where we hoped to hide from the fearsome Kongleks. But it turned out that this was no ordinary dog house; it was, in fact, a very special one, and one that I once knew well … The Doctor, astute fellow that he is, immediately notices that there is something unusual about the spot he has chosen as his hiding place:

After giving the Doctor a tour of the vast interior of the Doghouse of Justice, I can tell that he is very impressed. And yet, he seems vaguely disturbed about the origins of the Doghouse. 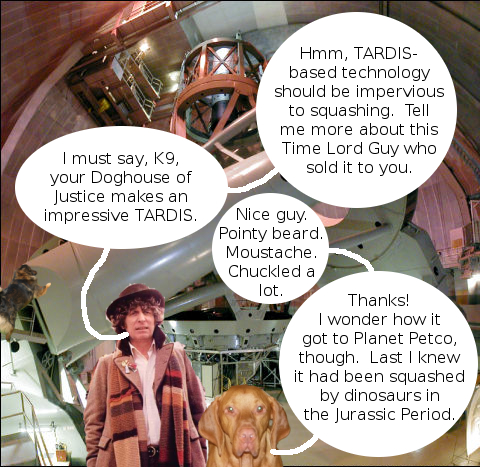 I attribute this to envy; after all, his TARDIS is stuck in the shape of a police box, and at this very moment is no doubt being overrun by Kongleks. Rather than attempt to retrieve it, we concoct a plan whereby I will take him back to Earth to a time and place when his TARDIS is already there while he is off having some adventure.

The Doctor mumbles something about paradoxes and time loops and altering history, but agrees to be dropped off; and so we are off through space and time, back to Earth.

Having finally rid myself of the ever-changing, borderline-mad Doctor, I can at last return to the university and resume my career in the archeology department, confident that everything will be exactly as I left it. 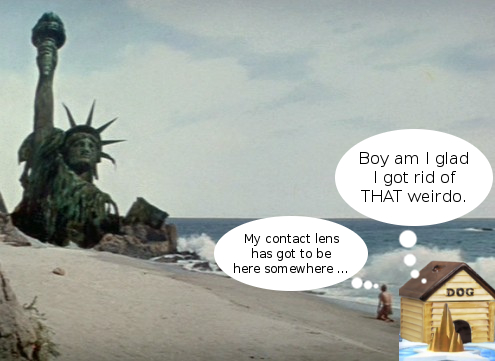 The Doghouse of Justice navigation unit says that it has materialized at the exact coordinates of my office at the university. I will soon be back behind my desk, planning my next expedition to find the Kingdom of the Gophers, or the Lost Kong, or one of any number of other quests which I have been neglecting these last few weeks. Despite the Doctor’s meddling, I have gotten back on track; because I am Dennis the Vizsla, and I never give up.

13 thoughts on “Rerun: The Doghouse of Justice Returns”