Hello, good readers. This is Tucker the Much Better Vizsla than Dennis. Lately there have been a number of scurrilous rumors floated that I am old and feeble or that I need to be administered fluids. But could these stories possibly be true? Let’s investigate and find out. Come, Trixie, the game’s afoot! 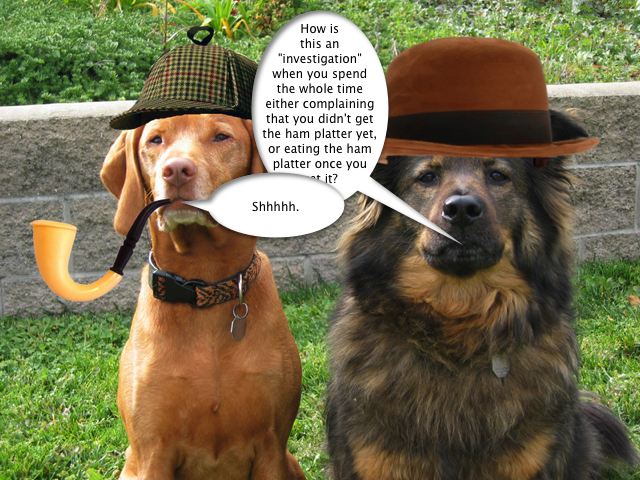 As our first piece of evidence, let us consider the so-called bag of fluids itself. As can be clearly seen in this picture, the bag is hanging high above the floor, from the apparatus that once supported the cage that housed the parakeet whose lovely singing so terrified the endlessly-neurotic Dennis that he attempted to dig his way out of the yard.

Oh, how I miss that bird. But I digress. The point is, if the fluids are way up there, how can they get to me down on the floor? The entire concept is silly. Besides, the most important piece of evidence is right here.

Now, Dennis, go away, because that’s my ham plate.

My barker may not work all that well anymore (some claim that this is due to my medical condition, but we all know it’s REALLY because I wore my voice out yelling at Dennis to behave), but just ask me if I want that ham plate.  I’ll tell you.

Now it may be the case that there are some needles on the shelf. I don’t know what they are for. Certainly they are not for me. Maybe they’re for giving Dennis sedatives. Dog knows he needs them.

And now, having conclusively demonstrated that the needles and fluids are NOT for me, let me show you the fact of the matter: That I have Mama and Dada perfectly trained to sit there and feed me pieces of ham for four minutes straight.

That’s a nasty lingering cough you have there, Dada.  Perhaps YOU need fluids, but clearly I do not.  Sorry to shoot down the whole “Tucker needs fluids” fairy tale you have spun, Dennis, but the truth has been revealed. The Adventure of the Ham Plate is eaten. I mean, closed.

14 thoughts on “The Adventure of the Ham Plate”