Producer Smurf: “Dennis! You can’t start the Awards and Meme Show now! I haven’t smurfed any guest stars or co-hosts yet!”
Dennis: “That’s okay, Producer Smurf — the Hipster Kitties agreed to be my new co-hosts.”
Producer Smurf: “I don’t think that’s a smurfy idea, Dennis. Those kids smurf the attention span of gnats.”
Dennis: “Maybe, but they’re working for free.”

akkording to the award tekst liebster is a jerman wurd meening lobster!!! mmm lobster!!! oh wayt sorry i red that rong it meens beloved or deerest wel of korse lobster is beloved and deer to evrywun wot luvs seef am i rite??? ennyway this award wuz kreeayted in twenny eleven and is passd on by bloggers to bloggers to show that they enjoy there wurk and giv credit to there efforts hmm credit i think that meens it is sort of like a visa card!!!

Producer Smurf: “Well, whatever. I suppose it can’t be any more of a disaster than some of your other shows.”
Dennis: “That’s the spirit!” 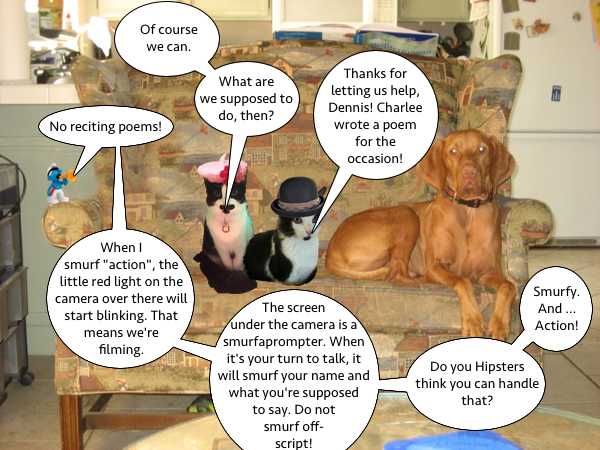 Chaplin: “Thanks for letting us help, Dennis! Charlee wrote a poem for the occasion!”
Producer Smurf: “No reciting poems!”
Charlee: “What are we supposed to do, then?”
Producer Smurf: “When I smurf ‘action’, the little red light on the camera over there will start blinking. That means we’re filming. The screen under the camera is a smurfaprompter. When it’s your turn to talk, it will smurf your name and what you’re supposed to say. Do not smurf off-script! Do you Hipsters think you can handle that?”
Charlee: “Of course we can.”
Producer Smurf: “Smurfy. And … Action!”

ok with the formaliteez owt of the way we ar reddy to beegin!!! heer ar the eleventeen kwestchuns!!! and i am going to let my cohosts the hipster kitties answer them as they ar noo to the blogging seen wareas i hav ben arownd for like ten yeerz and hav verry fyoo seekrets left!!! tayk it away hipster kitties!!!

1. What prompted you to begin blogging?
Charlee: Well, Dennis’s blog was here when we got here.
Chaplin: Yes, so it just seemed natural that we would start appearing on it.
Charlee: We don’t know what prompted Dennis to begin blogging.
Chaplin: I went back through some of his older posts and apparently he has been trying to sell magic flying coasters, tuning forks, sealed MacGyvers in a can, Viagr―
Dennis: Next question please!

2. Which language would you like to learn?
Chaplin: Are there languages other than Cat?
Charlee: No important ones.

3. What was your favorite experience in the past six months?
Charlee: Discovering catnip.
Chaplin: Discovering the fish tank.

4. What one location in the world you would like to visit? Why?
Chaplin: The fish tank.
Charlee: Because fish.

5. Do you have pets? If yes, please introduce them.
Chaplin: Yes, I do. Say hello to my pet dog, Dennis.
Charlee: Dada is my pet.

6. What is the strangest food you have ever eaten?
Charlee: Do moths count as food?
Chaplin: I think anything that goes into your mouth counts as food.
Charlee: You think everything is food.
Chaplin: That’s why everything goes into my mouth.

7. What is your biggest struggle while writing?
Charlee: Chaplin deciding he wants to play and pouncing on me.
Chaplin: Pouncing on Charlee.

8. Who would you like to receive a week of training/mentorship from?
Both: Trouble the Kit―
Dennis: Next question! Next question!

Producer Smurf: “Ahhh! Charlee! Are you out of your mind?! What did you smurf that for?”
Charlee: “Sorry. There was a blinking red light. I thought it was a laser pointer and lost control a little.”
Producer Smurf: “A little?! Look how you smurfed up the camera lens with your teeth and your dagger claws! I told you there would be a blinking red light, weren’t you listening to me?”
Charlee: “Not really, no.”
Dennis: “You can brush out the scratches in post, right, Producer Smurf?”
Producer Smurf: “Brush out the scratches in post?! Where do you smurf you are, Industrial Lights and Magic? No, Dennis, we’ll just have to smurf up with them. And … Action!”

9. What is the first thing you drink in the morning?
Chaplin: Water from my little metal bowl.
Charlee: Catnip tea.
Chaplin: Where do you get catnip tea from?
Charlee: Wouldn’t you like to know.

10. How many books do you read per month?
Chaplin: I don’t read very much. But I like to make muffins on the blanket while Mama and Dada watch Game of Thrones on the magic picture box and I’ve heard that used to be a whole bunch of books.
Charlee: I read whatever my pet Dada is writing or editing while I’m sitting in his lap. Sometimes I suggest revisions. Other times I just distract him.

11. What was your favorite time of year when you were growing up?
Charlee: So far we’ve only experienced spring, summer, and fall.
Chaplin: Yes, and I can’t really tell them apart, to be honest.
Charlee: I’ve heard they’re all basically the same season here.
Chaplin: Dennis told me that in winter we might get rain.
Charlee: What’s “rain”?
Chaplin: Dennis says it’s when water falls out of the sky.
Charlee: That sounds awful.
Chaplin: Yes, that’s what Dennis said.

Producer Smurf: “Well this is just perfect. They’re never going to smurf me back the security deposit on the camera now.”
Charlee: “Sorry. There were words moving across that screen thingy and I thought maybe I could catch them.”
Chaplin: “I wasn’t sure what was going on but it looked like Charlee was having fun so I had to join in.”
Dennis: “You can fix this with a green screen, right, Producer Smurf?”

well hmm it luks like that is abowt it for this sundays edishun of the sunday awards and meem show sinse the hipster kitties destroyd the eekwipmint!!! but befor i go berry the kamra in the bakyard and preetend it wuz never heer i wood like to offer the liebster award to enny of my frends hoo like lobster or hoo speek jerman or both!!! and thats a rap!!! ok bye

21 thoughts on “its the sunday awards and meem show hipster kitties edishun!!!”