If you’re done trying to get pictures of me eating tomatoes, how about you give me a boost onto the orbit lounger? I can’t get up there on my own anymore. 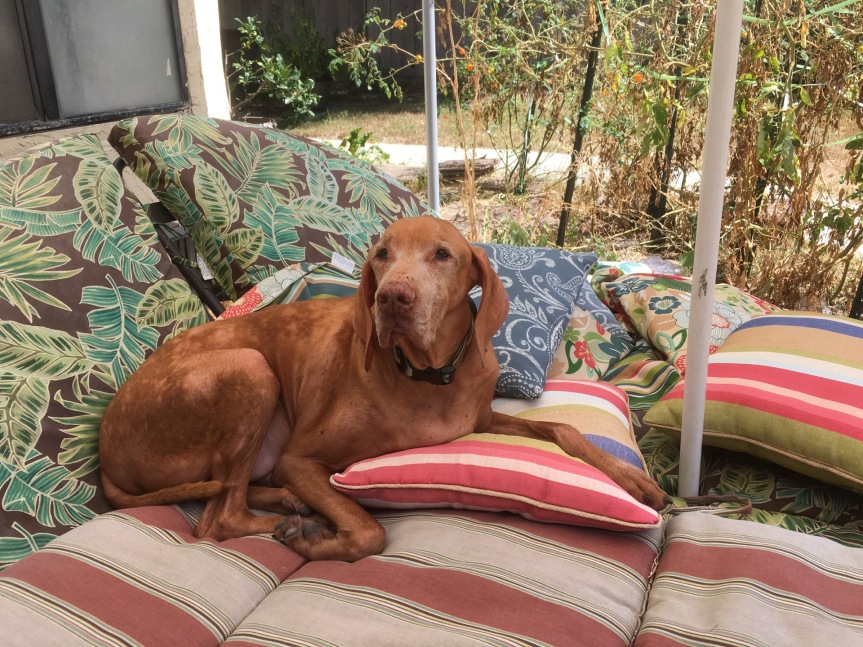 Thanks. Now how about a neck rub?

Thanks. Now how about sitting with me while I sniff the breeze for a while?

Thanks. Those were some good breezes. Okay, I’m ready to go inside. Hey, do you have any cardboard boxes you could give me?

Thanks. When life gives you cardboard, make confetti, I always say.

Why am I on the floor? Well, I can’t make it onto the furniture anymore. And if I did, I wouldn’t be able to get off again. So except for when I crawl my way onto the human bed, I mostly sleep on the floor these days.When I really want to get on the furniture, I’m not above asking for help. Hey, Dada, would you mind giving me a paw up? And yes, that’s more of my cardboard-shredding handiwork in the background. 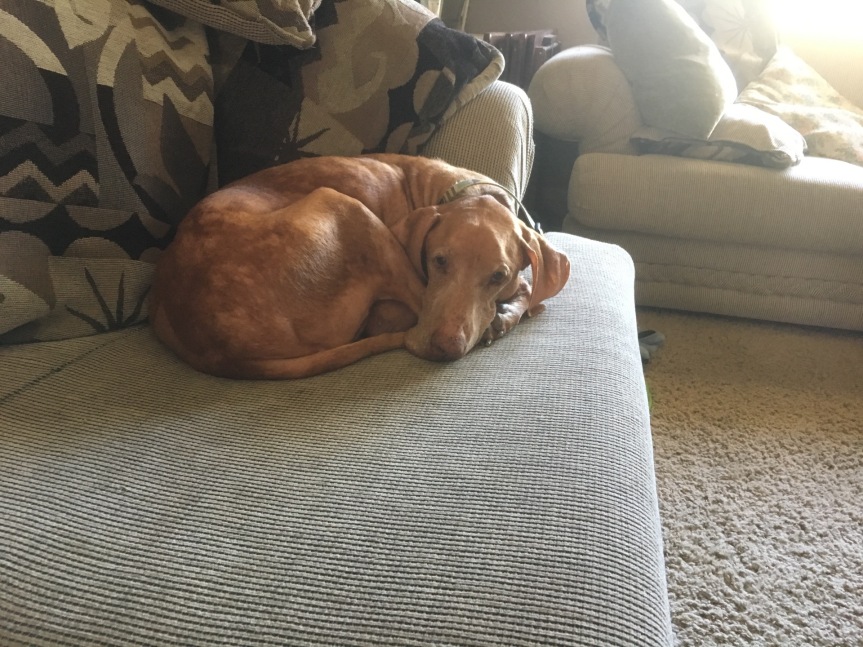 When I stay on the floor, sometimes I like to curl up on a nice warm fleece. And yes, that’s some of my shredded cardboard artwork in the background.

Other times I’m content with a cushy mat, Mama’s backrest, and a soft blanket that I can scuff around until it’s properly configured.

Hey, Dada, isn’t it time for you and Mama to go to bed?

What? You say 5pm isn’t bed time? Hmph. Maybe not for humans, but it’s bed time for me. Try not to disturb me when you come in later. Okay? Bye.

Dada’s Note: As the osteosarcoma in his left pelvis continues to progress, Dennis is having gradually increasing mobility issues; his “bunny hop” isn’t as hoppy as it used to be, and he is generally unable to get onto his accustomed spots on the furniture without assistance, which (unlike his brother Tucker, who was Mr. I’ll-Do-It-Myself-Or-Not-At-All) he does ask for from time to time. Fortunately he can still get onto the human bed, which we lowered years ago for Tucker’s convenience, and several months ago lowered even more (like, directly onto the floor) for Dennis’s. Because it’s one thing to sleep on the floor during the day and quite another to sleep on the floor instead of with the humans. Beyond controlling the pain, which is well-managed right now with medication and the two previous radiation treatments (there will not be a third), nothing more can be done for the osteosarcoma at this point; the cancer cannot be stopped, and he’s already exceeded the six-month median survival time by four months, tough little dog that he is.

Even more worrisome than the osteosarcoma at the moment is Dennis’s IBD, which has flared up over the last week or so, resulting in gastrointestinal distress for Dennis and “Cleanup In Aisle 6” distress for the humans. (Yesterday’s Caturday Matinee of Dennis eating well was shot a couple of weeks ago; unfortunately, he is not eating with that kind of gusto anymore.) We are currently struggling to bring that back under control. At this point all conventional treatments have failed and we are down to trying a few unconventional ones.

Finally, at Dennis’s recent cardiac recheck, it was found that his heart enlargement, which had been reversed when he started on pimobendan some time ago, is worsening again. In light of his other issues, the cardiologist recommended we not make any changes to his medications at this time. I suppose it says something when a Grade V heart murmur with a partial rupture is considered the least threatening of one’s medical conditions.

Despite his health issues and recent difficulty with his furniture therapy, Dennis remains in good spirits most of the time, but we can see what’s coming and have made arrangements for his favorite vet to return to her old practice to help him out one last time. When he lets us know he’s ready to join his departed pack and all his other friends over the Rainbow Bridge, or if we can’t make some headway soon against the IBD, we will be scheduling Dennis’s last appointment. We’re just not quite there yet.

26 thoughts on “Enjoy What You Can While You Can”