Posted on December 2, 2018 by The Oceanside Animals 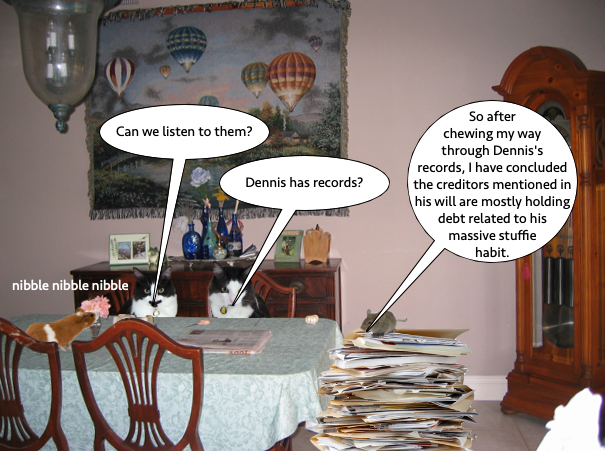 Mouse: “So after chewing my way through Dennis’s records, I have concluded that the creditors mentioned in his will are mostly holding debt related to his massive stuffie habit.”
Chaplin: “Dennis has records?”
Charlee: “Can we listen to them?”

Mouse: “No, these aren’t the kind of records you listen to. These are paper records with writing on them.”
Chaplin: “Paper? I heard records were made of vinyl.”
Charlee: “I heard they sound better than CDs or MP3s.” 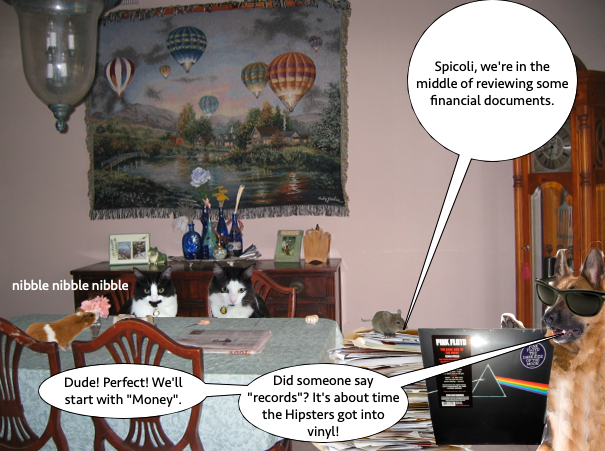 Spicoli: “Did someone say ‘records’? It’s about time the Hipsters got into vinyl!”
Mouse: “Spicoli, we’re in the middle of reviewing some financial documents.”
Spicoli: “Dude! Perfect! We’ll start with ‘Money’.”

Mr. Nibbles: “When you go retro, Mr. Spicoli, you really go retro, don’t you?”
Mouse: “This isn’t going to help the Hipsters with their creditor situation.”
Spicoli: “Creditors, shmeditors, dude. They’re cats. What’s going to happen? Is someone going to take them to court?”
(doorbell rings)
Vermin: “HISSS! Somebody’s at the door! I’ll get it, since you didn’t invite me to your nasty party!”

Process Server: “You’ve been served. See you in court.” 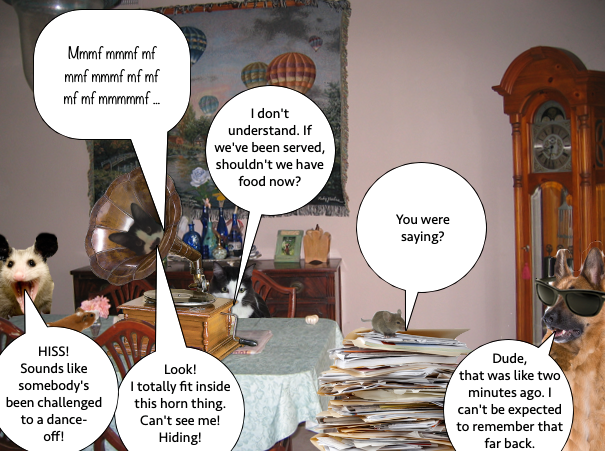 Vermin: “HISS! Sounds like somebody’s been challenged to a dance-off!”
Mouse: “You were saying?”
Spicoli: “Dude, that was like two minutes ago. I can’t be expected to remember that far back.”
Chaplin: “I don’t understand. If we’ve been served, shouldn’t we have food now?”
Charlee: “Look! I totally fit inside this horn thing. Can’t see me! Hiding!”