Posted on February 10, 2019 by The Oceanside Animals 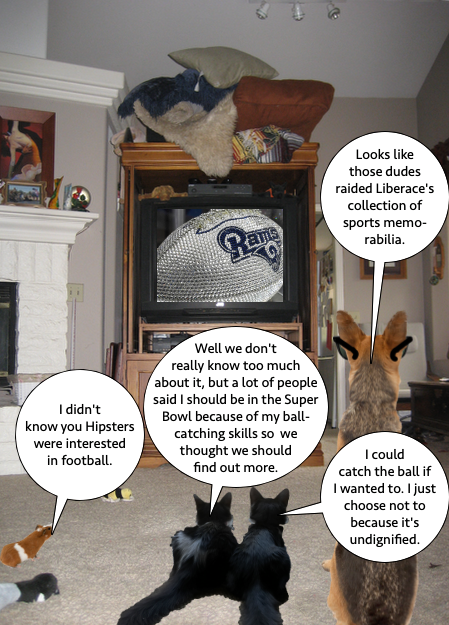 Spicoli: “Looks like those dudes raided Liberace’s collection of sports memorabilia.”
Mr. Nibbles: “I didn’t know you Hipsters were interested in football.”
Charlee: “Well we don’t really know too much about it, but a lot of people said I should be in the Super Bowl because of my ball-catching skills so we thought we should find out more.”
Chaplin: “I could catch the ball if I wanted to. I just choose not to because it’s undignified.”

Mr. Nibbles: “Are you sure you would want to play football, Charlee? It’s a rough game, and all the other players are a lot bigger than you.”
Charlee: “Are they? I haven’t seen any players yet, just all kinds of shiny toys I could knock over, like that blue glass thing. And those funny snail shells. Anyway I’m pretty fast, and I have claws.”
Spicoli: “Undignified? Dude, you chase moths and eat cobwebs.”
Chaplin: “Somebody has to do the housework around here.” 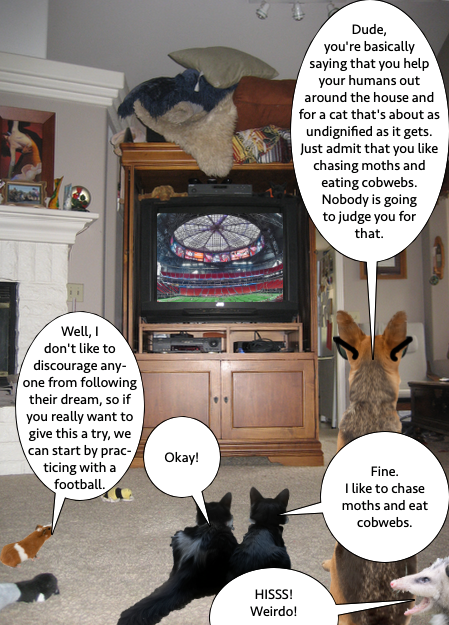 Mr. Nibbles: “Well, I don’t like to discourage anyone from following their dream, so if you really want to give this a try, we can start by practicing with a football.”
Charlee: “Okay!”
Spicoli: “Dude, you’re basically saying that you help your humans out around the house and for a cat that’s about as undignified as it gets. Just admit that you like chasing moths and eating cobwebs. Nobody is going to judge you for
that.”
Chaplin: “Fine. I like to chase moths and eat cobwebs.”
Vermin: “HISSS! Weirdo!” 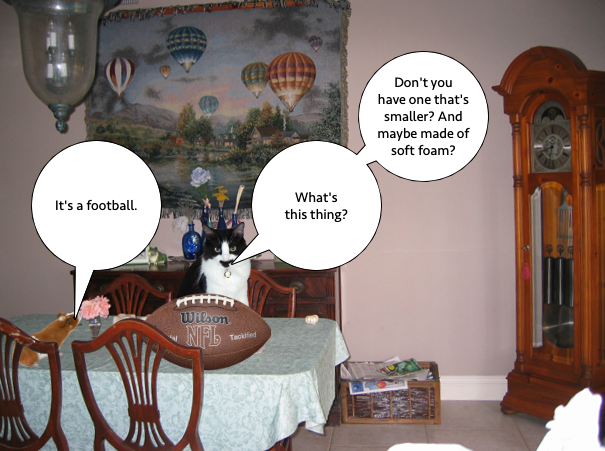 Charlee: “What’s this thing?”
Mr. Nibbles: “It’s a football.”
Charlee: “Don’t you have one that’s smaller? And maybe made of soft foam?”

← Caturday Matinee: Yes I Need Something
Wordless Wednesday: Blinded by the Light →