Overheard Around The Board Room

Posted on June 2, 2019 by The Oceanside Animals

Mouse: “So after extensive review and investigation, I have concluded that Lulu is not, in fact, a clone of Trixie.”
Spicoli: “Brilliant work, dude. What was the decisive factor? The way you just look at her and she rolls right over for a belly rub?”
Lulu: “I’ll be a clone of trixie if you want me to. I don’t mind.”
Mr. Nibbles: “You just be yourself, Miss Lulu. That’s what you’re here for.” 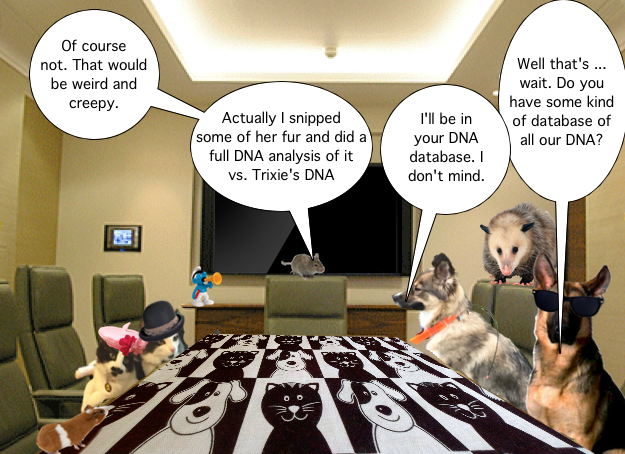 Mouse: “Actually I snipped some of her fur and did a full DNA analysis of it vs. Trixie’s DNA.”
Spicoli: “Well that’s … wait. Do you have some kind of database of all our DNA?”
Mouse: “Of course not. That would be weird and creepy.”
Lulu: “I’ll be in your DNA database. I don’t mind.” 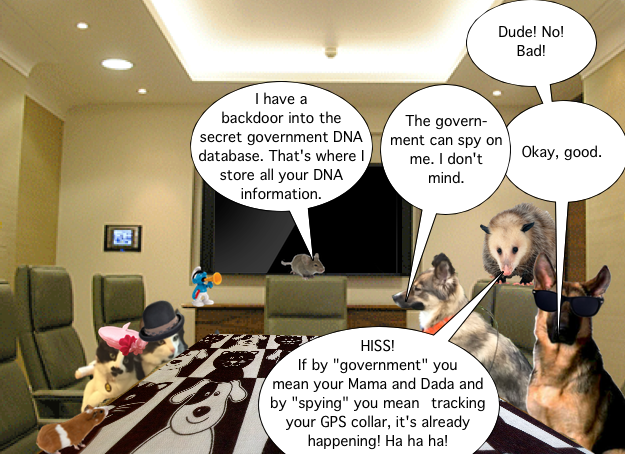 Spicoli: “Okay, good.”
Mouse: “I have a backdoor into the secret government DNA database. That’s where I store all your DNA information.”
Spicoli: “Dude! No! Bad!”
Lulu: “The government can spy on me. I don’t mind.”
Vermin: “HISS! If by ‘government’ you mean your Mama and Dada and by ‘spying’ you mean tracking your GPS collar, it’s already happening! Ha ha ha!” 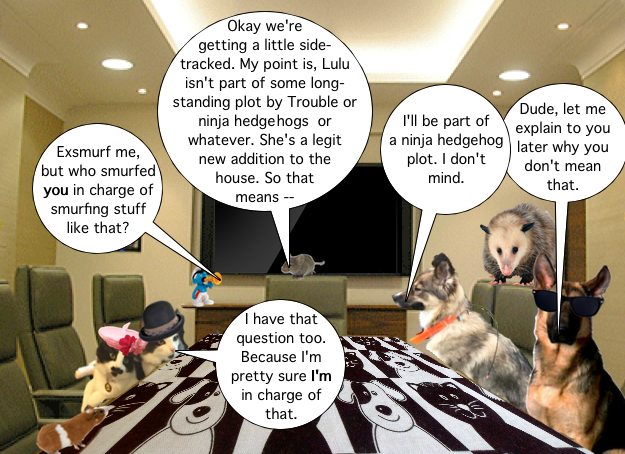 Mouse: “Okay we’re getting a little sidetracked. My point is, Lulu isn’t part of some long-standing plot by Trouble or ninja hedgehogs or whatever. She’s a legit new addition to the house. So that means –”
Producer Smurf: “Exsmurf me, but who smurfed you in charge of smurfing stuff like that?”
Chaplin: “I have that question too. Because I’m pretty sure I’m in charge of that.”
Lulu: “I’ll be part of a ninja hedgehog plot. I don’t mind.”
Spicoli: “Dude, let me explain to you later why you don’t mean that.”

Spicoli: “The Doritos Dudes? If we go with that maybe they will send us some free samples.”
Vermin: “Jill and the Morons Who Insist on Calling Her Vermin.”
Chaplin: “Chaplin in Charge.”
Charlee: “The Oceanside Animals?”
Mouse: “This isn’t a naming contest! But yes, it’s The Oceanside Animals. Very good, Charlee.”
Producer Smurf: “This is a farce. Nobody will ever smurf a show based on any of those titles.”

Scott Baio: “If you try to use Chaplin in Charge, you’ll be hearing from my lawyers.”
Chaplin: “Shut up, Chachi.”

← Caturday Matinee: Training Day
Wordless Wednesday: What’d You Get Me? →

14 Comments on “Overheard Around The Board Room”