NOTE: Previously-scheduled posts will continue to appear below this one.

Charlee: “Hello everyone! It’s us, the Oceanside Animals!”
Chaplin: “We are here with an update on how Dada is doing.”
Lulu: “For those who don’t know, what happened to Dada is that he suffered a ruptured brain aneurysm last month and as a result was in the hospital for a while.”
Charlee: “It was awful. All that time with no lap time in the office. I don’t know how either one of us coped.”
Chaplin: “You coped by meowing outside his office door, and I heard that Dada coped by hanging on to a new fuzzy stuffie that Mama got him that he named Substitute Charlee.”
Charlee: “What?”
Chaplin: “Yep, I heard Substitute Charlee stayed in the hospital bed with him all the time and even went with him for CT scans and stuff.”
Charlee: “WHAT?!?!?!?”

Lulu: “ANYWAY … since he was released from the hospital, Dada has been recovering well at home and gradually resuming his normal activities, such as drinking coffee and giving belly rubs.”
Chaplin: “And feeding us cats.”
Charlee: “And petting me on his lap in the office. Substitute Charlee indeed. Pfft.” 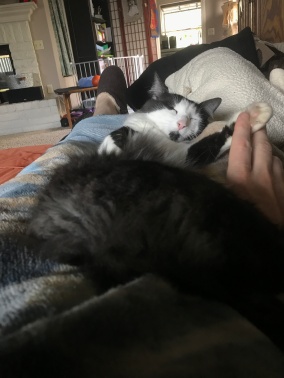 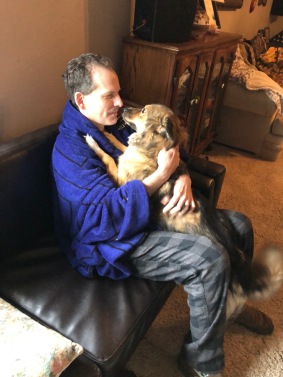 Dr. Lulu
Lulu: “We probably won’t be back this year but we expect to return in January of 2020 to visit all our friends and find out what’s been going on with everyone.”
Chaplin: “So we’ll see you in the new year!”
Charlee: “Here’s purring that it’s less eventful than this one was!”