Ragnar: “Hvitt er et veldig uheldig fargevalg for deg.”*
Troll: “Jeg valgte det ikke.”**
Lulu: “I’m not entirely sure what’s going on here.”
Spicoli: “You think this is bad, you should have been along for some of the stuff that happened to Dennis.”
Chaplin: “They’re discussing troll fashion.”
Producer Smurf: “I’m going to smurf my way out of here on my own since nobody is smurfing me any help!”

* “White is a really unfortunate color choice for you.”
** “I didn’t choose it.” 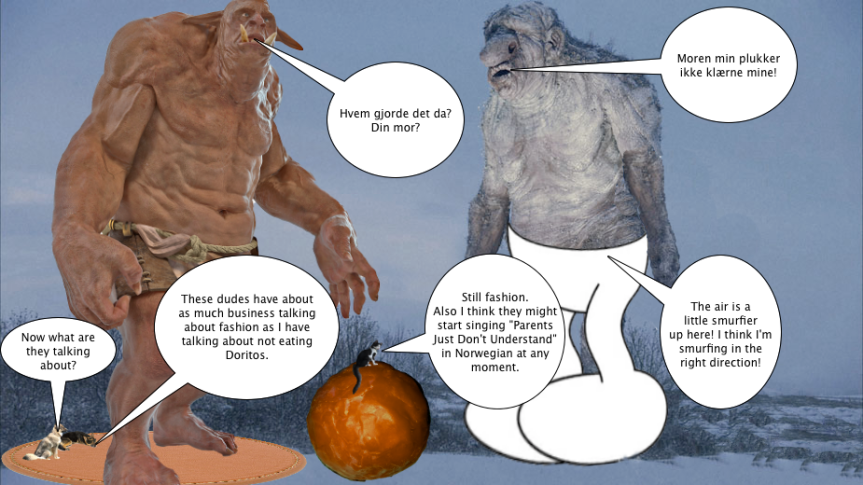 Ragnar: “Hvem gjorde det da? Din mor?”*
Troll: “Moren min plukker ikke klærne mine!”**
Lulu: “Now what are they talking about?”
Chaplin: “Still fashion. Also I think they might start singing ‘Parents Just Don’t Understand’ in Norwegian at any moment.”
Spicoli: “These dudes have about as much business talking about fashion as I have talking about not eating Doritos.”
Producer Smurf: “The air is a little smurfier up here! I think I’m smurfing in the right direction!”

Lulu: “All right then, I found another piece of evidence that Chaplin is in fact a troll.”
Spicoli: “What’s that, dude?”
Lulu: “He’s also obsessed with fashion. It’s why he wears a tuxedo all the time.”
Chaplin: “Hey now, hang on. I don’t wear a tuxedo because I’m obsessed with fashion. I’m just a tuxedo cat.”
Producer Smurf: “Ahhh! I made it! Smurfy, smurfy fresh air!”
Ragnar: “Jeg bare erter. Jeg kan ordne dette for deg. Jeg tror lilla ville ha en mye bedre farge.”*

* “I’m just teasing. I can fix this for you. I think purple would be a much better color.”

Lulu: “That’s a very convenient excuse.”
Spicoli: “Dude, are you trolling Chaplin?”
Lulu: “I have no idea what you’re talking about.”
Chaplin: “AAAAIIIIEEEE!”
Producer Smurf: “AAAAUUUUUGGGHHH!”

Ragnar: “Der, det er bedre. Nå kan vi sees sammen igjen.”*
Spicoli: “That screaming and running away wasn’t up to your usual level of kitty coolness, Chaplin.”
Lulu: “Yeah, what was that all about?”
Chaplin: “Are you saying neither of you heard that giant invisible cat hissing at me just then?”
Producer Smurf: “Well now I’m purple. Everyone is going to smurf that stupid fly smurfed me on the tail again.”

* “There, that’s better. Now we can be seen together again.”