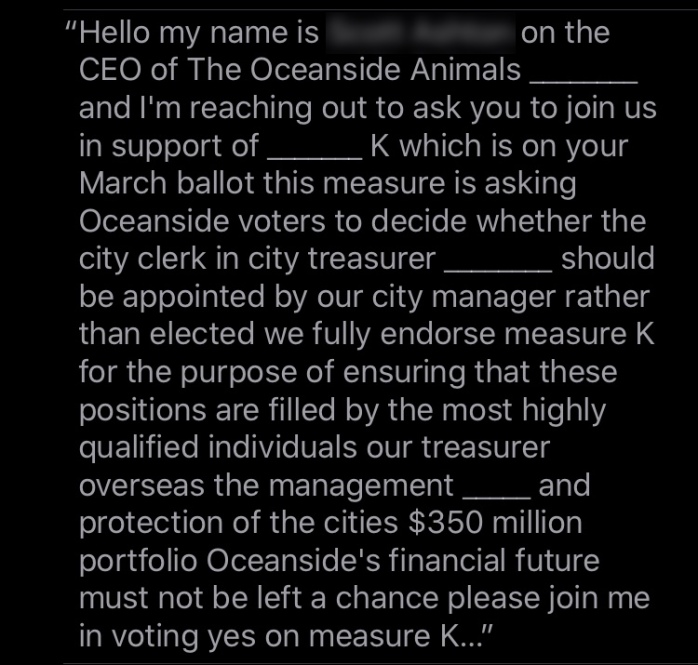 Lulu: “The first thing we need to do is fill in the missing words in the message. We can tell from the context which are nouns, verbs, adverbs, et cetera.”
Mouse: “I don’t think it’s a good idea to treat an automated transcription like a Mad Lib.”
Lulu: “Yes, I agree. This doesn’t have anything to do with the election.” 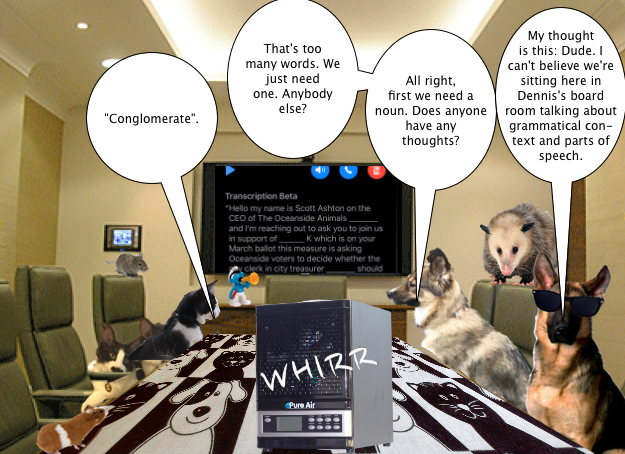 Lulu: “All right, first we need a noun. Does anyone have any thoughts?”
Spicoli: “My thought is this: Dude, I can’t believe we’re sitting here in Dennis’s board room talking about grammatical context and parts of speech.”
Lulu: “That’s too many words. We just need one. Anybody else?”
Chaplin: “Conglomerate.”

Lulu: “All right, now we need another noun.”
Chaplin: “Mars.”

Lulu: “And an adverb.”
Chaplin: “Ferociously.”
Mouse: “Where are you getting this stuff?”
Chaplin: “Just listening to the voices in my head.”*

Lulu: “And one more noun.”
Chaplin: “Chickens.”
Charlee: “That one, I think Chaplin is listening to his stomach.”
Chaplin: “Well, there hasn’t been any food at this meeting, so …”

Spicoli: “All right, dude, put that all together and what have you got?”
Lulu: “Hello my name is Scott Ashton on the CEO of of The Oceanside Animals conglomerate and I’m reaching out to ask you to join us in support of Mars K which is on your March ballot this measure is asking Oceanside voters to decide whether the city clerk in city treasurer ferociously should be appointed by our city manager rather than elected we fully endorse measure K for the purpose of ensuring that these positions are filled by the most highly qualified individuals our treasurer overseas the management chickens and protection of the cities $350 million portfolio Oceanside’s financial future must not be left a chance please join me in voting yes on measure K.”
Vermin: “HISS! No punctuation? Treasurer overseas? $350 million? Did Dennis write that?”
Mr. Nibbles: “I’m not sure they’re going to get many votes by telling people their financial future must not be left a chance.”

Mouse: “Have you considered actually listening to the message instead of relying on an error-ridden automatic transcription?”
Lulu: “What fun would that be?”