Lulu: “What’s this piece of furniture doing out here? It’s usually out in the garage.”
Charlee: “This is where the hosts sit for The Sunday Awards and Meme Show.”
Chaplin: “There’s an award this week, so we had Spicoli drag it out of the garage and put it here.”

Lulu: “Can someone explain to me how a Sunday Meme and Award Show works?”
Charlee: “Well, first, it takes place on a Sunday.”
Chaplin: “And second, you need to have a meme or an award to show.”
Lulu: “Uh-huh. Sounds pretty straightforward so far.”
Charlee: “In this case, all three of us plus our Dada were nominated this week for the Liebster Award by our friends Amy, Xena, and Lucy!” 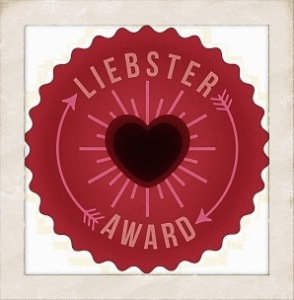 Chaplin: “Dennis had previously received the Liebster award multiple times—”
Charlee: “He was an award-receiving machine!”
Chaplin: “—but this Liebster Award looks different from his so it’s ours, all ours.”
Lulu: “And mine and Dada’s, right?”
Chaplin: “Sure sure. Whatever.”
Charlee: “It’s shaped like a ball, so it would be fun to bat around if we could like 3D print it or something.”
Chaplin: “I’m sure Dada will get right on that.”

Lulu: “I see. So Spicoli is hosting the show,then?”
Chaplin: “No, he just climbed up there and passed out after he finished moving the furniture for us.”
Charlee: “Apparently it was a little heavy.”

Charlee: “Now, awards usually come with rules, and this one is no exception.”
Chaplin: “The rules often involve answering questions. These are the questions that our friends asked us to answer.”

Lulu: “Ooh, there’s a quiz? I should be good at quizzes. Mama says I am very smart.”
Charlee: “It’s not really a quiz, per se, because there are no wrong answers. Except for the ones Chaplin gives.”
Chaplin: “Ha ha very funny.”

Producer Smurf: “All right, all right, it’s time to smurf this show on the road! Hey, why is that stage-hand sleeping on the set? Do I need to smurf security to smurf him out of there?”
Charlee: “No no, it’s fine, we’ll just work around him.”

Chaplin: “We blog to carry on the tradition of adventures like Dennis used to have.”
Charlee: “Although nobody has adventures like Dennis used to have.”
Chaplin: “Probably it was because of his hat.”
Charlee: “Hey, didn’t you and I used to wear hats?”
Chaplin: “We did, but that was mostly to help people tell us apart.”
Lulu: “People have trouble telling you apart? But you don’t smell anything alike.”
Charlee: “Yes, well, people don’t have as good a sense of smell as you do, Lulu.”
Chaplin: “And also it’s a little hard to smell us through the computer screen.”

Dada: “I mostly blog because I like to tell stories, and I use pictures and cutouts of the animals because I can’t draw.”

2 Blue jeans or formal wear? Cake or a health bar? Why?

Charlee: “Is a collar blue jeans or is it formal wear?”
Chaplin: “Must be formal wear. Blue jeans don’t have a collar.”
Lulu: “I wear a collar too, but you won’t see it under my fur.”

Lulu: “Hmm tough question. I’ve never had either one, so I’m not sure.”
Charlee: “Whichever one has meat in it.”
Lulu: “I’d like to change my answer to Charlee’s answer.”
Chaplin: “Cake and the health bar and probably the wrapper the health bar came in.”

Dada: “Cake, because frosting. Unless it’s 15 years ago and I’m out on my mountain bike, in which case, health bar, because cake would get squashed in my pocket.”

Producer Smurf: “You two look ridiculous smurfed up on top of Spicoli like that. Smurf down from there.”
Spicoli: “They’re just fine where they are, dude.” (sotto voce) “Hey if you guys could do that kitty kneading thing on my back that would be awesome.”
Lulu: “Say, isn’t this settee right where one of your litter pans usually is? What did you do with that?”

3 If you could have one (more) animal live with you, what would it be and why?

Dada: *Gestures at Lulu and the Hipster Kitties*

4 What do you feel are your greatest talents?

Dada: “Well, I think I’m not bad at writing, and I dance fairly well …”

5 If you could be any age, what would it be and why?

Lulu: “Age? What is age?”
Charlee: “I think I’m a good age now. I would like for Chaplin to be a kitten again.”
Chaplin: “Why?”
Charlee: “Because you were the perfect brother up until you turned into an annoying teenager.”

Dada: “Hmm … Well, 26 was a pretty nice age. Old enough to know better, young enough to still have good hair. Also, I’m pretty sure my joints didn’t pop so much back then.”

6 If there was one thing you could go back and do differently, what would it be?

Lulu: “I’d get adopted by Mama and Dada sooner!”
Charlee: “I can’t really think of anything. Life has been pretty good!”
Chaplin: “I would go back and find a way to sabotage the vacuum cleaner.”

Dada: “I would go back and get a more confident artist for the comic book series I was working on for Eclipse. Oh, and also, maybe find a way to avoid having a cerebral aneurysm rupture …”

Meanwhile, out in the garage … 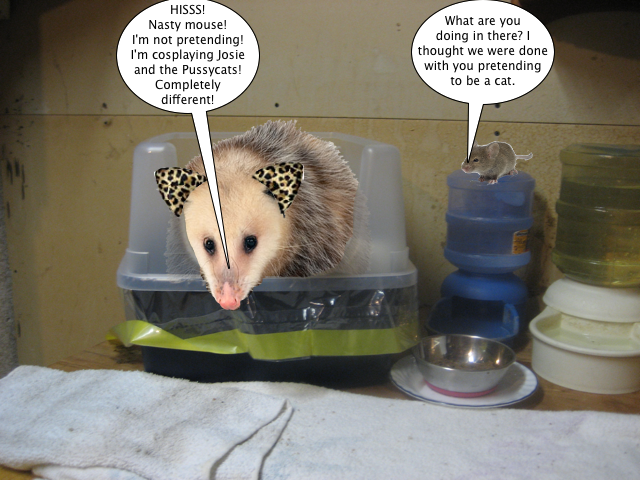 Mouse: “What are you doing in there? I thought we were done with you pretending to be a cat.”
Vermin: “HISSS! Nasty mouse! I’m not pretending! I’m cosplaying Josie and the Pussycats! Completely different!”