Snack Quest with a Vengeance

Posted on August 9, 2020 by The Oceanside Animals 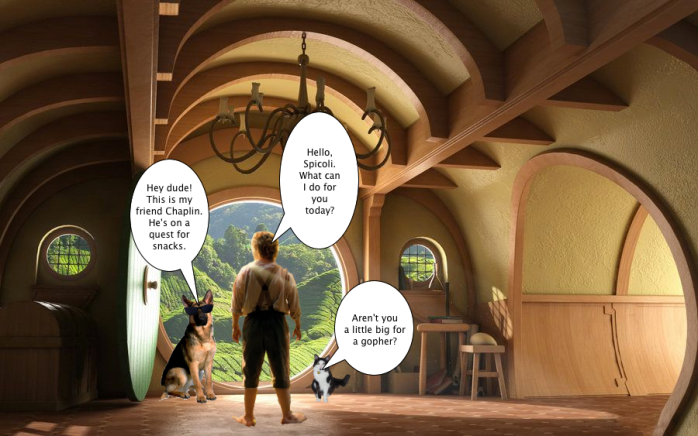 Bilbo Baggins: “Hello, Spicoli. What can I do for you today?”
Spicoli: “Hey dude! This is my friend Chaplin. He’s on a quest for snacks.”
Chaplin: “Aren’t you a little big for a gopher?” 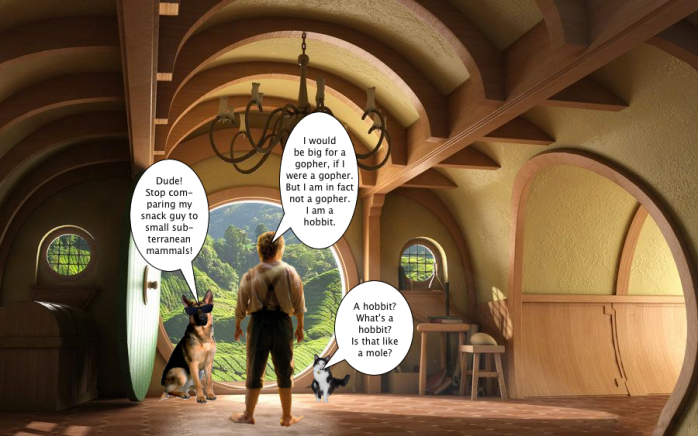 Bilbo Baggins: “I would be big for a gopher, if I were a gopher. But I am in fact not a gopher. I am a hobbit.”
Chaplin: “A hobbit? What’s a hobbit? Is that like a mole?”
Spicoli: “Dude! Stop comparing my snack guy to small subterranean mammals!” 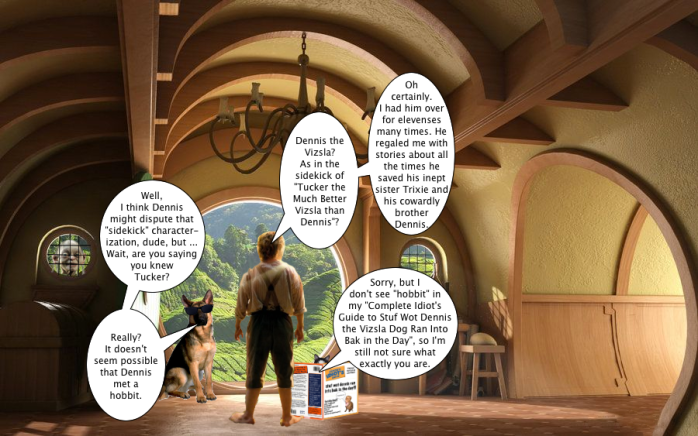 Chaplin: “Sorry but I don’t see ‘hobbit’ in my ‘Complete Idiot’s Guide to Stuf Wot Dennis the Vizsla Dog Ran into Bak in the Day’ so I’m still not sure what exactly you are.”
Spicoli: “Really? It doesn’t seem possible that Dennis never met a hobbit.”
Bilbo Baggins: “Dennis the Vizsla? As in the sidekick of Tucker the Much Better Vizsla thatn Dennis?”
Spicoli: “Well, I think Dennis might dispute that ‘sidekick’ characterization, dude, but … Wait, are you saying you knew Tucker?”
Bilbo Baggins: “Oh certainly. I had him over for elevenses many times. He regaled me with stories about all the times he saved his inept sister Trixie and his cowardly brother Dennis.” 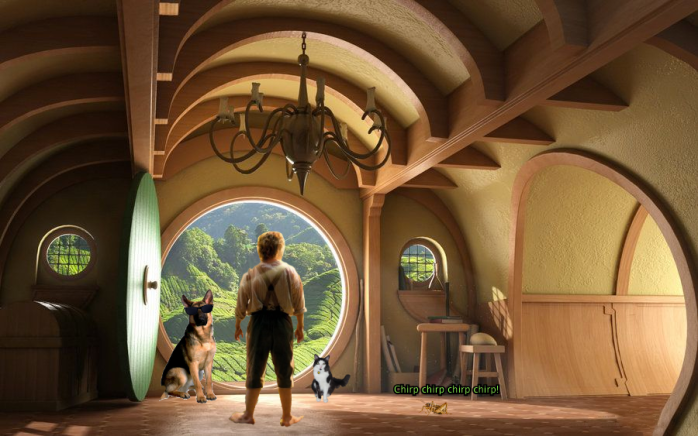 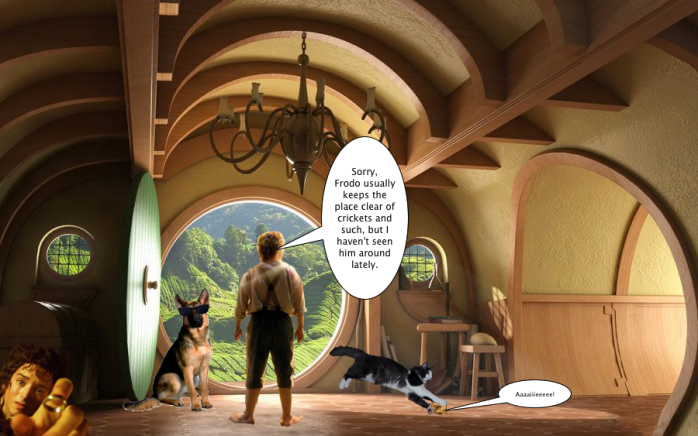 Bilbo Baggins: “Sorry, Frodo usually keeps the place clear of crickets and such, but I haven’t seen him around much lately.”
Cricket: “Aaaaaiiiieeee!” 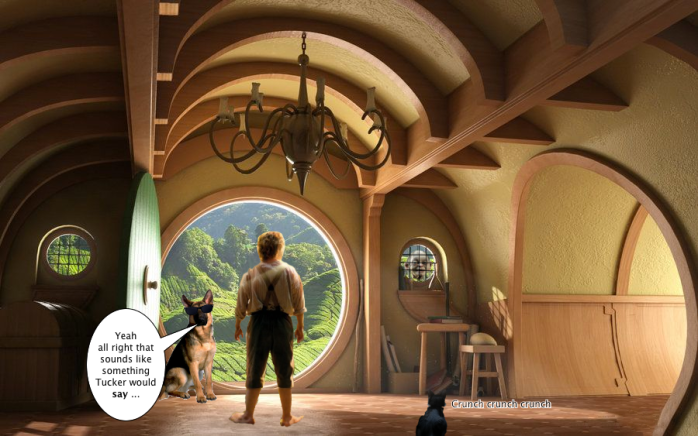 Spicoli (extremely delayed reaction): “Yeah all right that sounds like something Tucker would say …” 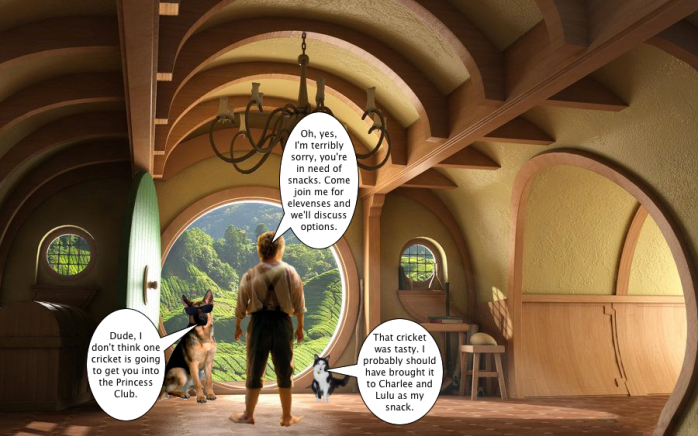 Chaplin: “That cricket was tasty. I probably should have brought it to Charlee and Lulu as my snack.”
Spicoli: “Dude, I don’t think one cricket is going to get you into the Princess Club.”
Bilbo Baggins: “Oh, yes, I’m terribly sorry. You’re in need of snacks. Come join me for elevenses and we’ll discuss options.” 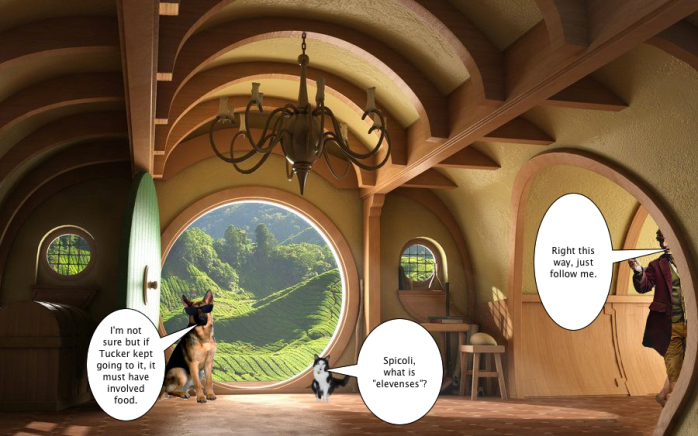 Bilbo Baggins: “Right this way, just follow me.”
Chaplin: “Spicoli, what is ‘elevenses’?”
Spicoli: “I’m not sure but if Tucker kept going to it, it must have involved food.” 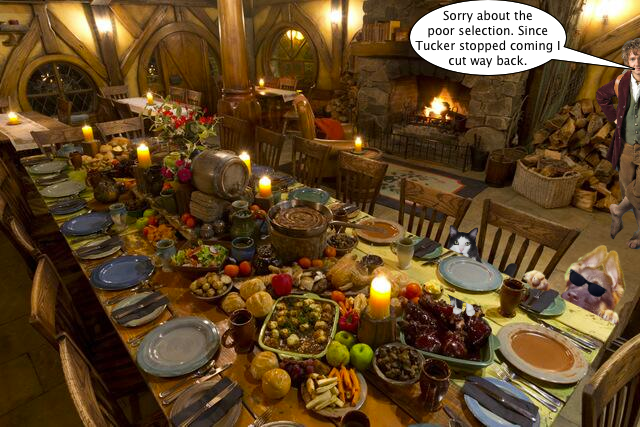 Bilbo Baggins: “Sorry about the poor selection. Since Tucker stopped coming I cut way back.” 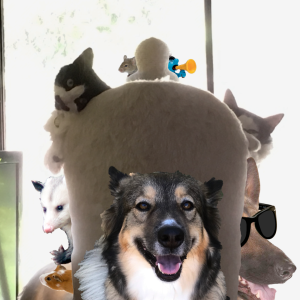 11 Comments on “Snack Quest with a Vengeance”