For Rainbow Bridge Remembrance Day this year, I thought I would revisit all the “In Memoriam” posts from over the years of Dennis’s Diary of Destruction. There have, of course, been too many, but that’s the way it goes when your house is full of furry animals. 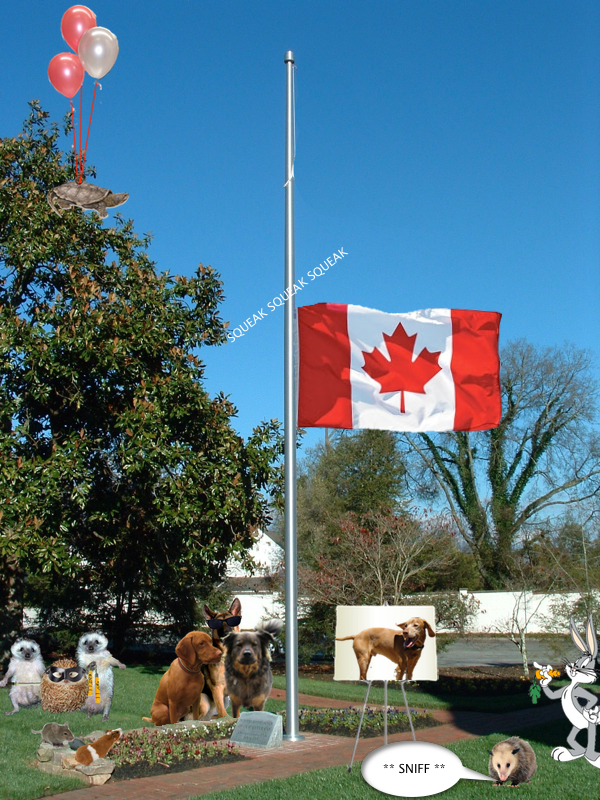 Meanwhile, Over The Rainbow Bridge …

In Memoriam: The Beautiful Trixie, 2015 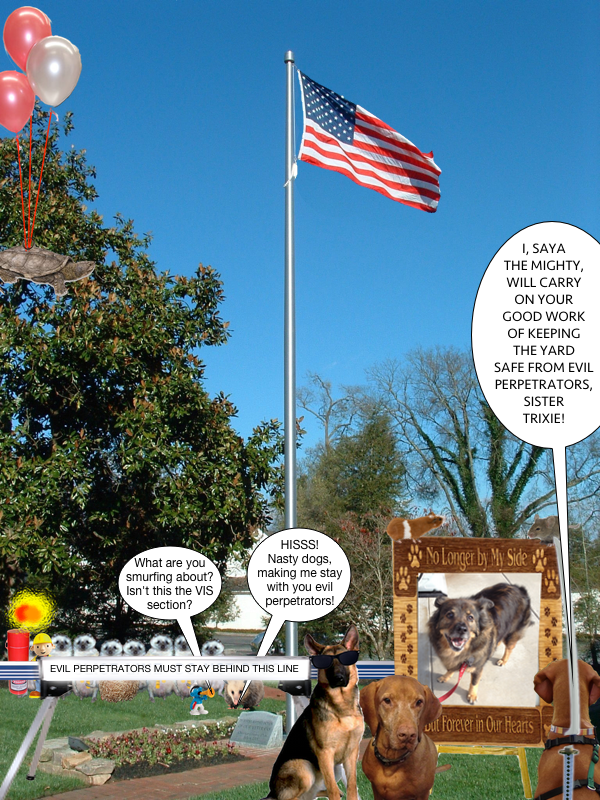 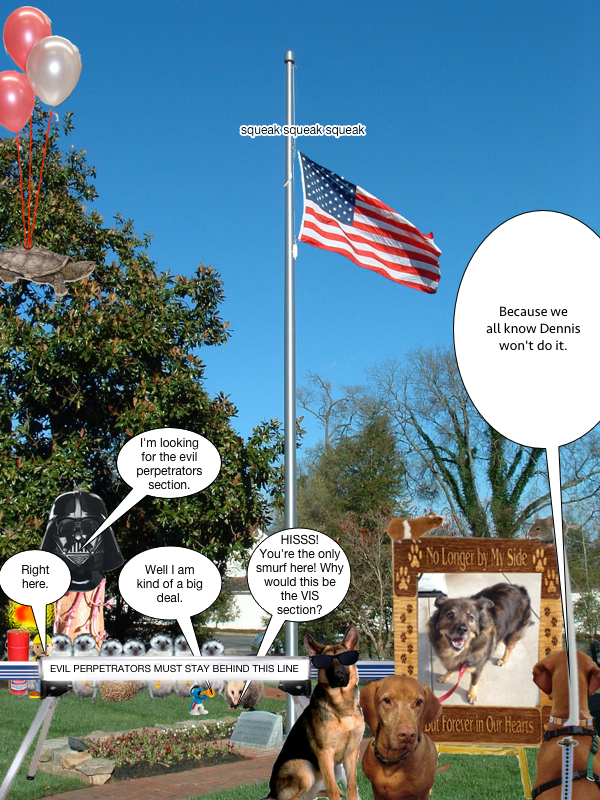 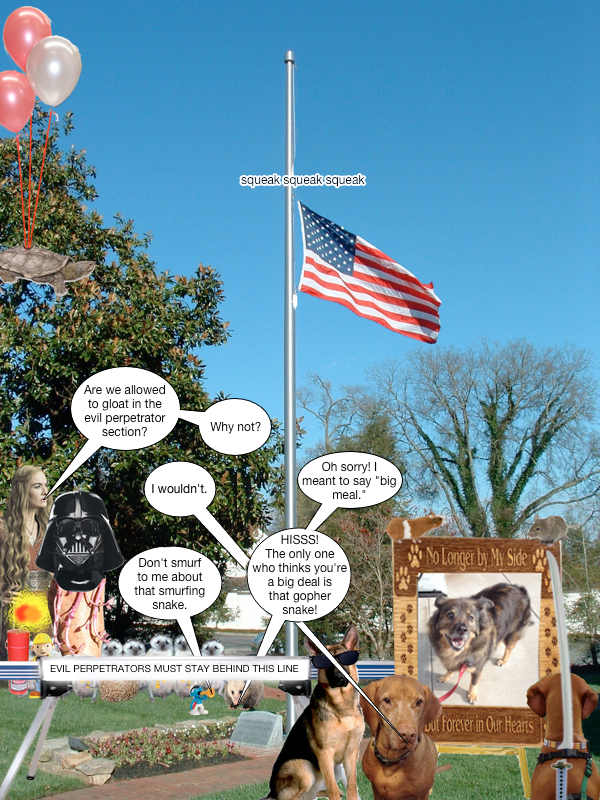 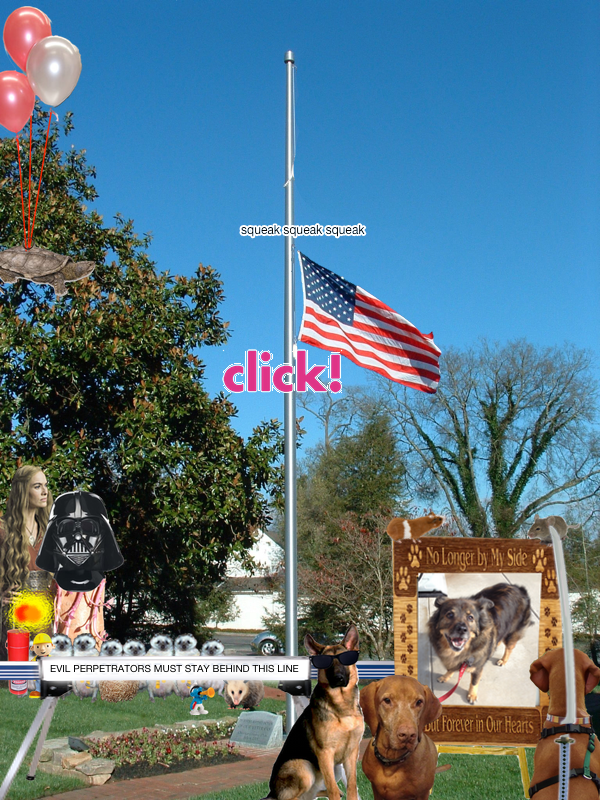 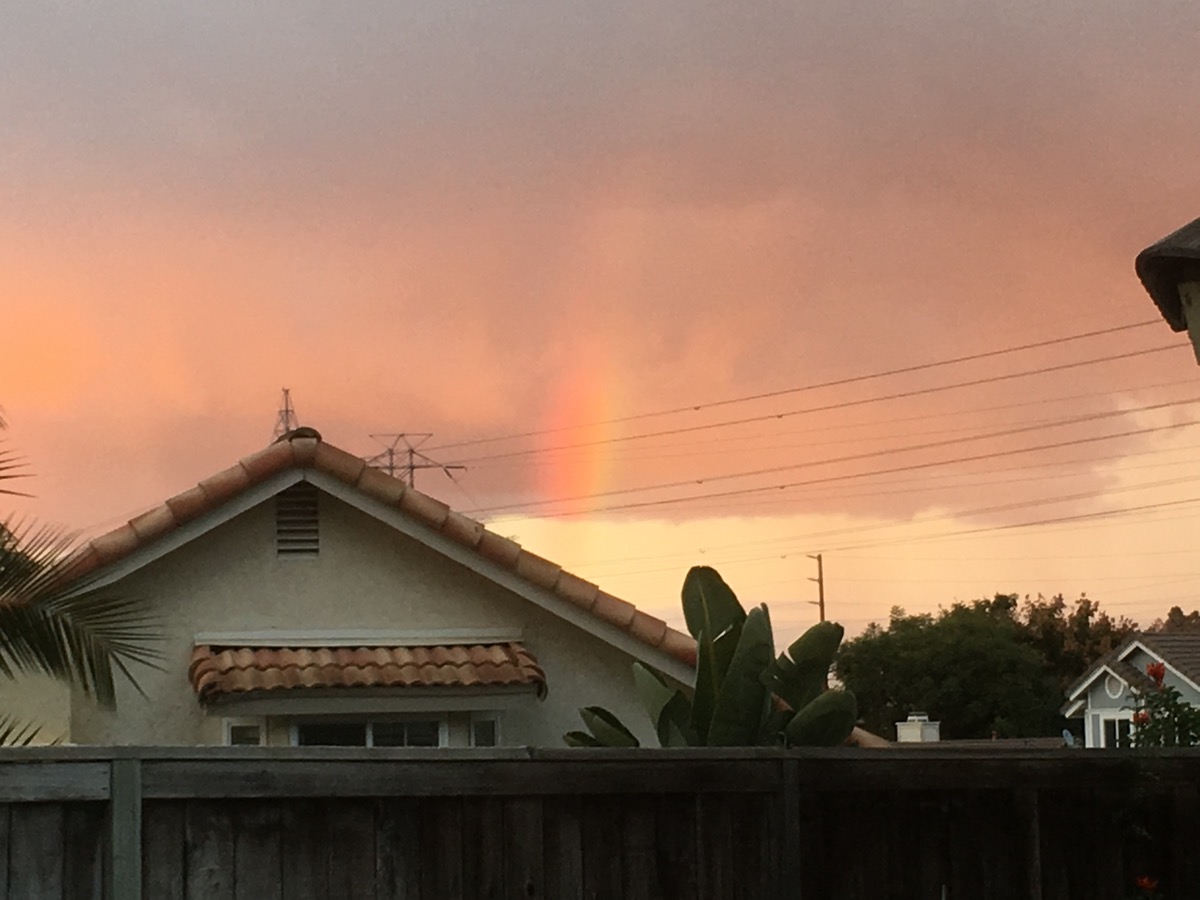 In Memoriam: Dennis the Vizsla Dog, 2018 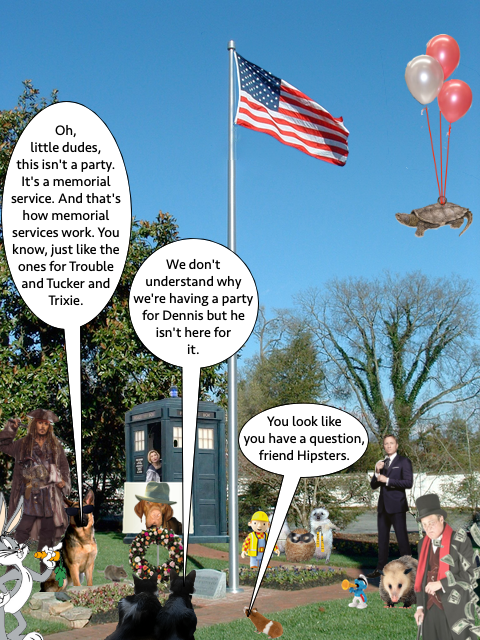 Mr. Nibbles: “You look like you have a question, friend Hipsters.”
Chaplin: “We don’t understand why we’re having a party for Dennis but he isn’t here for it.”
Spicoli: “Oh, little dudes, this isn’t a party. It’s a memorial service. And that’s how memorial services work. You know, just like the ones for Trouble and Tucker and Trixie.” 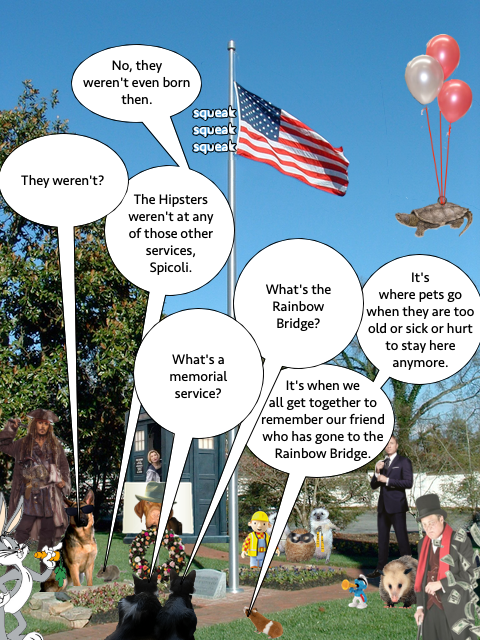 Mouse: “The Hipsters weren’t at any of those other services, Spicoli.”
Spicoli: “They weren’t?”
Mouse: “No, they weren’t even born then.”
Charlee: “What’s a memorial service?”
Mr. Nibbles: “It’s when we all get together to remember our friend who has gone to the Rainbow Bridge.”
Chaplin: “What’s the Rainbow Bridge?”
Mr. Nibbles: “It’s where pets go when they are too old or sick or hurt to stay here anymore.” 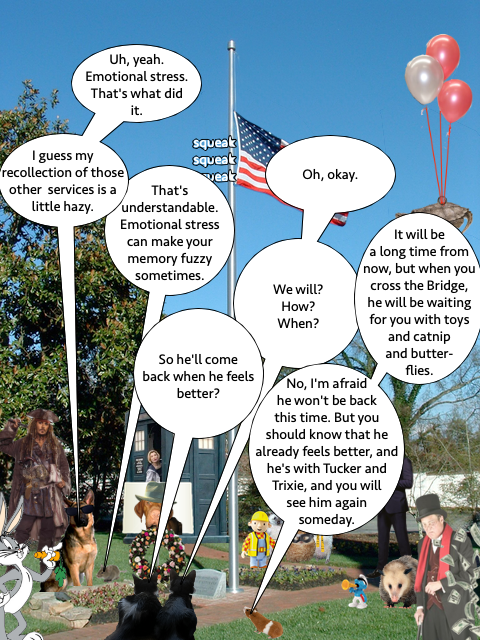 Charlee: “So he’ll come back when he feels better?”
Mr. Nibbles: “No, I’m afraid he won’t be back this time. But you should know that he already feels better, and he’s with Tucker and Trixie, and you will see him again someday.”
Chaplin: “We will? How? When?”
Mr. Nibbles: “It will be a long time from now, but when you cross the Bridge, he will be waiting for you with toys and catnip and butterflies.”
Chaplin: “Oh, okay.”
Spicoli: “I guess my recollection of those other services is a little hazy.”
Mouse: “That’s understandable. Emotional stress can make your memory fuzzy sometimes.”
Spicoli: “Uh, yeah. Emotional stress. That’s what did it.”

Meanwhile, Over The Rainbow Bridge …

Dennis: “Tucker! Trixie! Trouble! Pooh Bear! I’ve missed you all! Some more than others.”
Trouble: “That’s probably a shot at me, but I don’t care, because I’m a cat. Purr purr purr.”
Pooh Bear: “Hello again, Dennis. Long time no see.”
Dennis: “Big hug, Trixie!”
Trixie: “You crazy vizslas and your public displays of affection.”
Tucker: “Welcome to the Rainbow Bridge, Dennis. Help yourself to something from my everlasting buffet. I’m willing to share because anything you take is replaced as soon as you take it.”
Dennis: “Hey wow so the Rainbow Bridge and the Everlasting Buffet have been in the front yard all this time?!”
Tucker: “Well it’s everywhere and anywhere we want it to be. We like to come here sometimes so I can still sit on Mama’s lap and steal from the kitchen. That really confuses them.”
Trixie: “And I still like to sit and stare at the hill. Those squirrels are already getting uppity.”
Tucker: “But a lot of the time we just hang out with all your old blog friends, swapping stories and running around like lunatics.”
Trouble: “They really do. Nutty dogs. I get tired just watching them. Fortunately I like to sleep.”
Dennis: “My blog friends? All of them? Cool! Let’s go visit them! Can we bring the buffet?”
Trixie: “Of course we can.” 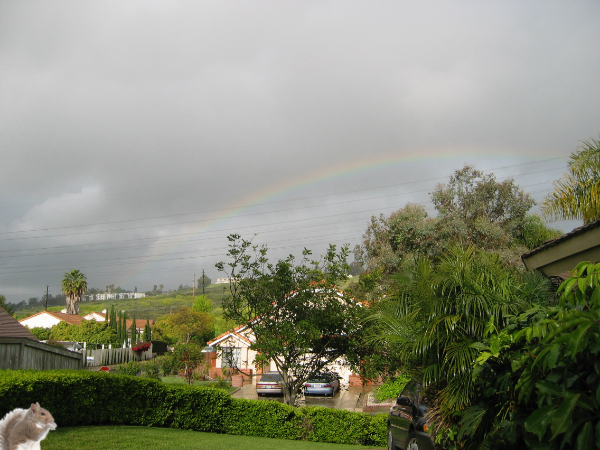 13 thoughts on “Rainbow Bridge Remembrance Day: All The In Memoriams”