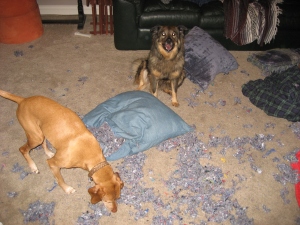 So on Sunday, we took Dennis, Tucker, and Trixie to Fiesta Island, a large off-lead park in San Diego, to meet some other people from the local vizsla rescue group, including his sister, who was also rescued from the canyon in Lake Elsinore. (His brothers were not in attendance.) We went into the park, met his sister and the others, and headed for the beach. We thought Dennis wanted to play with his sister, so we let him off-lead, and he immediately took off running — past his sister, past everyone else, down to the beach, through the gap between the fence and the water, and back up to the road. Well obviously that isn’t what we were expecting.

END_OF_DOCUMENT_TOKEN_TO_BE_REPLACED

its my mess and i love it 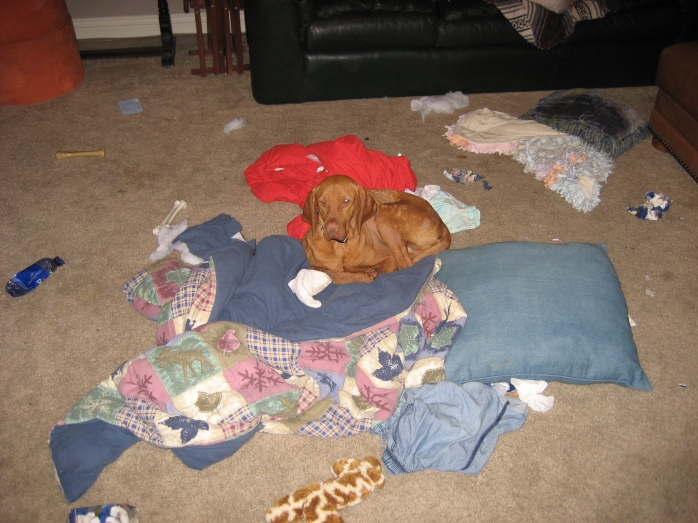 hello nice reederz its dennis daddy left hisself loged in agin so i am heer to tel yoo i did not tare up the chaze lounj i was jus minding my own bizness when sudnly the chaze lounj came to life an starded chasing me an tucker an trixie around the hous an tryin to skwash us well it turns out the kitties had turnd the chaze into a rowbot chare to skwash us dogz but then it got overloded and bloo up skattering fluff evrywher it had just enuf enerjy to go bak to the living room wher mama fownd it anywun hoo sez it was me hoo tore it up is a dirty liar ok see yoo cant trust kitties just ask these guys.

“You’ve got a nice army base here, colonel.”

So it seems that we didn’t pay Dennis his “protection money” (AKA “pig ears”) when we left for work yesterday, and my wife thinks that’s why he turned the living room into a chaise lounge abattoir. I don’t know if that’s the case, or if he’s just built up a tolerance for passion flower, or if Tucker did it knowing we would blame it on Dennis. (Trixie already got a “why didn’t you stop him?” so evidently it’s partially HER fault.)

Oh, crap, I just confessed. Well, fortunately nobody ever reads this blog, so the secret is safe.

Did That Used To Be A Sheep?

No, that was a leather chaise lounge, otherwise known as “the most expensive piece of furniture in the house”. The big white blob is the pillow that once formed the backrest of the lounge. However it was also way too big for the room, so we’re not as upset as you might think. We did buy a new plastic airplane-style crate for Dennis the Menace, so there’s an excellent chance I’ll be posting pictures of the shattered remains of a plastic crate before too long. It is too late for the chaise, but it died so that other furniture might live.

My wife is planning to make a new backrest for the chaise, perhaps out of faux-suede pillows. Then we’ll sell it and buy ourselves a nice little couch from IKEA.

hello nice reederz my nam is dennis i am a vizsla dog i like to tare things up but mama has ben givin me pashun flour drops an they mak me sooooooo relaksed that i don’t feel like taring things ennymor i jus want too li kwitely on my bed an wate for mama to come home an …..

….. sorri i had to pee anyway if u reed this pleez tell mama not to giv me pashun flour ennymor becuz ……..

So as anyone with a vizsla knows, vizslas sleep in bed with you. Period. If you try to keep them out, they will make sure you know how unhappy they are by whining, scratching, yelping, and generally carrying on. All. Night. Long. Dennis, who was probably kept chained up outdoors before being dumped in the canyon, was initially unaware of this rule, but we think his brother Tucker must’ve shown him the Vizsla Guide to Manipulating Humans, because he’s in the bed now.

Unfortunately, he doesn’t quite know how to stay in bed.

END_OF_DOCUMENT_TOKEN_TO_BE_REPLACED

So yesterday when we went to visit our Swedish friends, who are moving back to Sweden (*SNIFF*), my wife gave Dennis a few drops of “passionflower”, which is supposed to calm him. I would expect something called “passionflower” to have the opposite effect on an unneutered male dog (he’ll be getting fixed next month), but when we got home after being gone most of the day, he hadn’t destroyed anything. I was worried that I wouldn’t have anything else to write about. Fortunately, she forgot to give him his passionflower today when we went grocery shopping, and here’s what we found on the floor that shouldn’t have been there:

Things are once again accumulating in his “stash”. A picture of the “stash” will be coming soon, I swear.

Authorities today confirmed the discovery of a disemboweled Canada goose toy underneath the bed. The goose’s rear end had been torn off and its honk bladder and hose removed. When found, the goose was in the possession of Tucker the vizsla, who was desperately trying to make it honk like it used to. A source, speaking on condition of anonymity, said that while Tucker was carrying the mutilated goose, he is believed to have found it in that condition and is not a suspect.

A “vizsla of interest” has been identified in the crime, but so far no charges have been filed. It is believed that this vizsla, who goes by the name “Dennis”, may also be involved in the mutilation deaths of several other toys. Individuals with any information about these killings is encouraged to contact the toy police. Authorities have released this picture of “Dennis”: 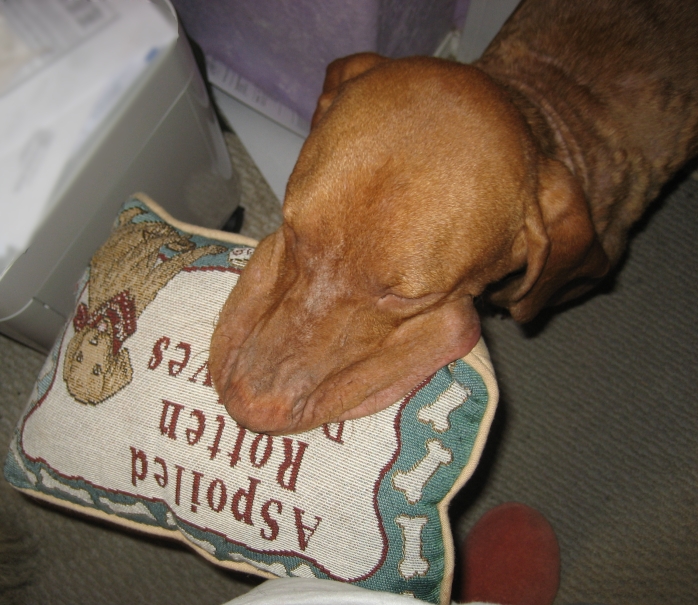 Do not attempt to apprehend “Dennis” yourself, as he is considered armed and extremely cuddly.

As for the disemboweled goose, it is going to be stuffed with pretend onions, garlic, and potatoes, baked in a pretend oven, and served as pretend Christmas dinner.

Well it was a slow day for Dennis … it appears that he only destroyed one thing, one of those stuffed toys that honks instead of squeaks. These toys have a large bladder and a hose inside of them that make a noise like a goose or a cow or whatever. Today Dennis was going for quality of destruction over quantity.

We can’t even tell what exactly this toy used to be. We think it might be his brother Tucker’s old Canada goose, but we’re not sure; all that’s left of it are a few bits of fluff, some fur, a whole lot of small pieces of foam rubber stuffing, and the honker. Removed from the stuffed animal, the honker looks an awful lot like, say, a stomach with the esophagus still attached. (That’s the horror writer in me talking … you have read at least one of the stories or novel excerpts that were the original reason for this blog, right? Oh come on, please? Pretty please? Somebody? Bueller???)

Dennis was carrying the honker around quite proudly this evening, as if it were a trophy that he claimed after defeating the stuffed animal in a lengthy, epic battle. Judging by the wreckage around the house, that’s exactly what happened.

I’m not sure if this will really be a “daily” diary or not, but if the past is an indicator, it will be — for a while, at least.

So at this point, Dennis is locked out of the bedrooms and bathroom when we’re gone, but this still leaves him the kitchen, hallway, living room, and dining room to play in. (These modern houses, they don’t have doors. Or interior walls.) There’s still plenty of stuff to wreck in these rooms, for instance:

Mind you, this is after my wife plugged in some $40 gadget she got at Target that’s supposed to calm dogs with pheromones and “floral essences”. This has no apparent effect on Dennis. Tomorrow we’ll probably find that he pulled it out of the socket and chewed it to pieces; or maybe it will kick in and he’ll be sitting on the floor looking stoned. Bets, anyone?

So it seems like the posts about Dennis the Rescue Vizsla are among the most popular on this blog, and since we do strive to give the people what they want, I thought I would provide a little rundown on his activities over the last few weeks. Now that he’s getting his energy back, most of these activities involve wrecking stuff.